Two Films Not to Miss 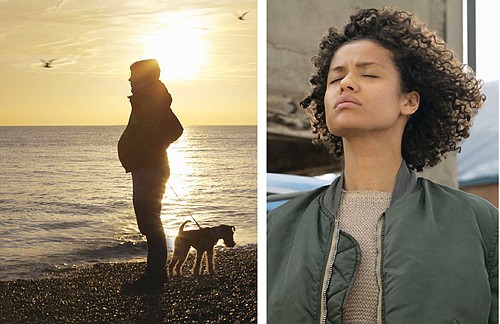 A transgender man’s path to parenthood is explored in “Seahorse, ” a new film that will deepen your understanding of trans identity and the meaning of parenthood and fatherhood (left) and Gugu Mbatha-Raw stars as a woman on the run in “Fast Color," a new movie focusing on three generations of black women and the powerful gifts they bring to the world along with the dangers and struggles they face (photos by Tribeca Film Festival and Jacob Yakob/Codeblack Films, respectively).

As I write this, I’m headed to the Seattle International Film Festival, and I’m sure I’ll come back with a host of film recommendations. But before that happens, I don’t want to miss mentioning two films that you might otherwise overlook, and that I caught on limited theatrical runs.

“Seahorse” played at QDoc in Portland a couple of weeks ago, and so rocked my world that it is a contender for my list of the best films of 2019. It follows the journey to parenthood taken by Freddie McConnell, who, as a trans man, is one of a limited number of human males who can, like male seahorses, undergo pregnancy. Many things make that complicated, of course, not least being other humans who feel entitled to an opinion on Freddie’s reproductive capacity. But also, in addition to all the usual physical and hormonal challenges of pregnancy, Freddie must also temporarily suspend testosterone therapy, which is critical to his wellbeing in ways those of us who are not trans can scarcely understand.

In what turns out to be a characteristic display of self-awareness, Freddie, a journalist, sensed the importance of telling his story well and also the importance of enlisting someone else to help him do it. He chose well in director Jeanie Finlay, who spoke at the screening I attended. She is a sensitive co-traveler through a very difficult journey that deepened immeasurably my sense of trans identity and the meaning of parenthood and fatherhood. Freddie’s candor and lucidity—and also his increasing silence through the most difficult parts of his experience of pregnancy—shed light on so many things I had not understood before, and helped me to be appropriately curious about things I had not thought to notice.

Among them were the ways in which our fear and assumptions keep us from appropriate curiosity—which requires us to hold our assumptions much more loosely than we are prone to do. At one point Freddie attends a dinner in which a group of women attempt to support his journey through pregnancy with remarkably little awareness of or curiosity about how their experience cannot possibly be the same as his. At another, he is with relatives who quickly turn to anger at him for simply staking out some space for his own truth. Freddie’s experience also made me reflect on how pregnant women actually do experience some similar dynamics.

Freddie is blessed with a mother, Esme, who balances his picture of fatherhood with an inspirational picture of motherhood; her support throughout is so astute that he actually wants her there at the birth of his child. We are also privileged to be there, and it is one of the most moving things I have ever witnessed. At this birth, as well as many other moments in the film, I felt that I was witnessing what it means to be embodied in a whole new way. I am forever changed. The film will air on the BBC and is in negotiation for further distribution.