No to Government Control of Women’s Bodies

These are draconian abortion bans 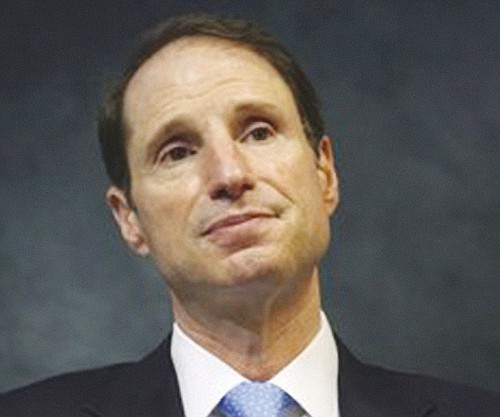 Editor’s note: The following speech by U.S. Sen. Ron Wyden, D-Ore. was delivered last week on the Senate floor in Washington, D.C., against the recent passage of some of the nation’s strictest abortion bans in U.S. history:

Right now in state capitals across the country, Republican lawmakers are passing extreme bills that throw 45 years of settled law on reproductive rights out the window. This is an open, coordinated attack on Roe and a woman’s right to choose the healthcare she needs.

These Republican lawmakers are passing bills that are not only harmful, but are overwhelmingly opposed by the public -- bills with harsh criminal penalties for women and doctors. Bills with no exceptions for cases of rape or incest. Bills that explicitly compare women getting medical care to the Holocaust.

Let’s be clear on what this is all about.

The party of Donald Trump is insisting on government control of women’s bodies.

That’s what’s on the table with the laws you’re seeing in Alabama, Georgia, Missouri and elsewhere. Government control of women’s bodies.

Millions and millions of women across the country are watching in anger and in fear as this plays out. I’ve heard from many of them back home in Oregon. They’re afraid for the future - their futures, their families’ futures - because they know what’s at stake with this attack on their rights.

If you need proof, just look at the figures before and after Roe. In the decades before Roe, thousands and thousands of women died due to unsafe abortions - and those are only the ones we know about. What about the unnamed, unknown victims of that misguided policy? After Roe was decided in 1973, women’s health care got safer. Now they are talking about undermining that safety.

Second, in key ways, the future these restrictive laws are creating is worse for women and health care professionals than before Roe.

They are talking about jailing doctors for life. They are talking about treating women like hardened criminals after they get a medical procedure. Women in some places are facing the prospect that they might need to report miscarriages to the government, or else they could wind up in prison.

The other side in this debate paints a picture of women exercising their right to choose that is unfair and unrealistic. This is an incredibly difficult choice. Many women exercising their right to choose have just been hit with the most devastating medical news that prospective parents can face. It is not up to state lawmakers and government bureaucrats to step in and interfere in that choice.

But that’s exactly what’s on offer with the laws being passed in statehouses around the country. These laws bind and punish women with a level of government control that did not exist before Roe. This is straight out of nightmarish fiction.

This coordinated attack on women’s rights is cruel and dangerous. Abortion and other reproductive decisions are health care, and health care choices ought to be made by women with the help of the doctors they trust. Not the federal government. Not state lawmakers.

Women and their doctors -- that’s it.

My Democratic colleagues and I are going to fight against this at the federal level with everything we’ve got. Women across the country are standing up and fighting with everything they’ve got.

The government should not have control of women’s bodies. End of story.