Race and Truths Unfold in ‘Redwood’ 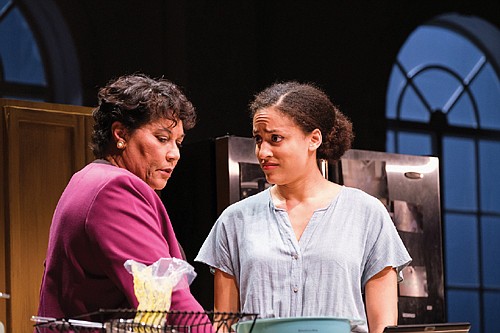 There are some deep questions hidden in plain sight for Americans about how each of us is connected to everyone else. For white people especially, it's not polite to ask those questions, so they have little practice doing it. For those of us who are black, indigenous and people of color, the answers can also be dangerous. The world premiere of "Redwood," which just opened at Portland Center Stage at the Armory, aims to surface some of those questions with a lightly comic look at what happens when the genealogy search undertaken by a black woman's curious uncle reveals that her white boyfriend's ancestors enslaved her ancestors and that the two lovers are, in ways they would never have imagined, related.

Playwright and star Brittany K. Allen means to surface a lot that even the most "woke" among us are not accustomed to grappling with. In the Portland Center Stage's world premiere production, it both works and doesn't work that some of the cast members seem to be struggling to hold their pieces of the story; at moments I couldn't tell how much of that was intentional and how much was because the actors themselves were having trouble holding the discomfort of their characters' journeys. Conversations between Meg (Allen) and her mom (Jennifer Lanier) and between Meg and her boyfriend Drew (Nick Ferrucci) sometimes had a distractingly awkward rhythm.

The cast members who hold the rhythm of this story best, as it turns out, are four who move between multiple roles, functioning as a kind of chorus in the end, and often are on stage only to move. One of Allen's smartest choices in crafting the play is to punctuate the dramatic action with interludes of hip-hop dancing; four cast members enter the action to dance or do yoga, and are fully in their bodies and in connected, powerful rhythm. Meg's uncle Stevie (Tyrone Mitchell Henderson, funny and facile), whose ancestry search sets the play's events in motion, sometimes joins them, often awkwardly and a bit out of step. Henderson adroitly captures the challenge of entering the flow of the truth of shared connections.

American life as we have conceived it does not prepare us to metabolize and embody much of what is true, as Allen's play reveals. At best, we can talk around the edges, including among our closest relatives. Even before Stevie uncovers the difficult connections between Drew and Meg's family, Meg and her mother react differently to the prospect of exploring the past; mom doesn't see the point and evinces familiar (if somewhat unexamined) signs of lifelong discomfort with holding a family history of enslavement. Meg is not, perhaps, as afraid as she should be; a millennial whose reactions evince familiarity with anti-racist, anti-colonization concepts, she little expects to learn anything that will challenge her own sense of agency.

But challenged she is, and so is Drew, whose white family has good progressive credentials. He fumbles for the right words to say when Stevie confronts him with their shared family history and calls his own father to inquire about his familiarity with their legacy as enslavers. Dad (Orion Bradshaw, on point as dad and also dancing hip-hop) classically dodges the question as one that is not polite to ask. Case closed.