Confronting the Erasure of Women in Juarez 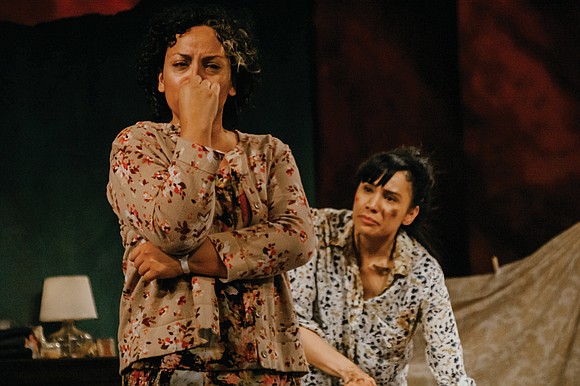 Cristi Miles and Naiya Amilcar in ‘La Ruta,’ a harrowing story that gives a voice to women who have disappeared or been murdered from the border community of Juarez, Mexico. Plays through Dec. 1 at Portland Opera, 211 S.E. Caruthers St. For tickets call 503-241-1278 or visit artistsrep.org. Photo by Kathleen Kelly/Courtesy Artists Rep

"La Ruta" comes to Portland with the purest of intentions; playwright Isaac Gomez sought to bring attention to the plight of missing and murdered women at the U.S.-Mexico border, who since 1993 have been easy targets along the unprotected bus route to their low-wage work in U.S.-owned factories in Juarez, Mexico. After a successful world-premiere of the play at Steppenwolf Theater in Chicago, Artists Repertory Theater sought to further develop the play for Portland audiences, who now have the opportunity to sit with the neglected stories on which Gomez based his play.

There is much to admire in the effort. The play shifts back and forth in time, before the disappearance of a particular 16-year-old girl, scrambling our perception of events and our sense of the play's characters -- the disappeared young woman, her mother, her mother's friend (whose own young daughter has also gone missing) and other women employed in the same maquiladora.

Without the scrambling, we would tend to focus more on solving the question of who (in an individual sense) is responsible for the young woman's disappearance and would miss the opportunity to experience disorientation which resonates, if only slightly, with the experience of the women themselves. As the play reveals, the women live without answers, without the information needed to even draw a timeline, let alone to obtain anything resembling justice. The materials provided to audiences fill in the context further: Most of the disappeared women are young, between the ages of 12 and 22, and most of the bodies recovered show signs of sexual assault. Their bodies are typically dumped in the desert or in garbage dumps and sewage ditches, as though to emphasize that their lives have no value. They are often women new to Juarez, who have come from rural areas to grab the bleakest of economic opportunities.

The play's focus is less on plot and more on the emotional truth of the women. How do the women deal with the risk they face going to and from their jobs? How do they make sense of things that make no sense? How do they deal with unrelenting loss and disregard? With unanswered questions? With the inability to seek protection without exposing themselves to further risk? We spend some time with them in the factory; we listen to friends and rivals argue; we watch them react to fear and despair and exist in a world in which unthinkable things happen regularly and no one cares enough to take effective action.

Shining light on stories of such oppression is more difficult than it looks. We want answers; we want to solve the mystery. At most, we want to locate the story outside of anything that could touch us, to congratulate ourselves for attending to a story that is tragic, or sad or powerful. Although there are no definitive answers to what has happened to many or most of the disappeared women of Juarez, the play could do more to help audience members ask themselves the questions that would awaken appropriate self-examination. What does it suggest about American culture that now hundreds of Mexican women have disappeared while employed at subsistence wages by American companies, and yet so little has been done to protect them and stop the killings? What does it suggest about how much we value the lives of these women -- of women at the margins and women in general -- that most of us know so little about this pattern of disappearances? What connects our lives to theirs? Although I expect audience members will be moved, the play could do more to prompt them to internalize such questions.

With that said, holding space for stories like these is an important starting point. It is a move against the erasure of these women; it helps us to visualize their faces and voices, and guides us toward the practice of empathy and of treating their lives as valuable. The music of this production -- traditional Mexican folk songs sung by the cast -- give voice to their dreams and hopes. And this play, based on the stories of real women, gives them names: Yolanda. Marisela. Ivonne. Brenda. Zaide. Desamaya.