Administration called out for toxic environment 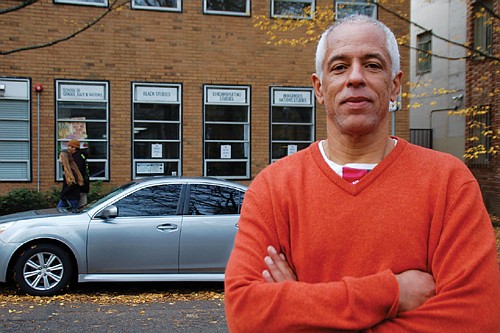 Professor Ethan Johnson, who heads up the Black Studies Department at Portland State University, says he doesn’t feel like celebrating the department’s 50th anniversary because the university is failing to support the department and even more is failing to listen to the concerns of minority students and teachers at the school. Photo by Beverly Corbell

This school year is the 50th anniversary of the formation of the Black Studies Department at Portland State University, a momentous occasion for celebrating the formation of a degree curriculum devoted to the history, culture and politics of black people, but the African-American director of the department doesn’t feel much like celebrating.

Ethan Johnson, who has served in the department for the past 15 years and who became chair of the department in September, says the university is failing to support the black studies curriculum and even more is failing to listen to the concerns of minority students and faculty at the school, a result that is disastrous to their wellbeing.

In a blistering four-page letter, Johnson accounts for the dismal support PSU gives his department and for black students on campus in general, from the arming of campus security with guns to not supporting black professors and administrators for hiring and promotion, issues he believes affects the health and even threatens the lives of black employees and students at PSU.

As an example, Johnson said that it was not long after the school’s Board of Trustees, whom he referred to as “an unelected group of overwhelmingly white men” voted to form a campus police force, that Jason Washington, a black man, U.S. Veteran, postal worker and father of two, was killed by campus police on the edge of PSU campus. Johnson said virtually all faculty and students were opposed to arming PSU security.

Added to that danger, Johnson says, as shown in peer-reviewed articles, is that the stress of daily doses of racism affects overall health as it “gets into our bodies and overworks us, causing breakdowns in our hearts, reproductive systems and other areas.”

Johnson said those are the more subtle ways racism affects black bodies, but said the violent death from gunfire at the hands of campus police and slow deaths from stress-causing racism are interconnected.

He cites the example of an outspoken PSU black professor who was denied tenure because, Johnson believes, he actively called out racism on campus and clashed with more conservative higher-ups. He died at 50 from a heart attack and Johnson wonders if the frustration of being one of the few voices speaking out against white supremacy and not getting the support of the university led to his early demise.

The school also has not correctly supported the Multicultural Center on campus, which promotes activities for non-white students, Johnson said.

He said the center’s former coordinator, for example a person of color, expanded the center to better serve all minorities, even opening it up for Friday prayers for Muslim students. But several years ago, he said a white lesbian was hired to work on restructuring the program and the job was elevated to a director position.

The former black male coordinator was passed over for promotion to the new position despite his experience and success at “truly practicing equity,” Johnson said. The man then died of a stroke in his early 60s, which Johnson attributes, at least in part, to stress he experienced with being treated unfairly by PSU.

Johnson is not alone in his criticism. He said a study of the Black Studies Department conducted by PSU two years ago found that faculty in the department were “exhausted and overextended” and predicted without new faculty the department was unsustainable.

“So, in the celebration of Black Study’s 50th year in existence, we also get to watch its death,” Johnson said. “Without the faculty to run the department, Black Studies will not be able to fulfill its course rotation, student advising and research responsibilities. It will disappear.”

To add insult to injury, Johnson said the school gave his department only $5,000 to stage a 50th anniversary celebration, and that’s not enough to do it right, he said.

“That’s nothing as far as flying someone (a guest speaker) in, housing them and renting a space,” he said. “That’s nothing. It’s really a slap in the face.”

Johnson cites a decrease in administrative support for the Black Studies Department over the past few years, to that point that PSU administrators refuse to fill vacancies in his department, while claiming budget constraints.

Larger departments have had their faculty vacancies filled, Johnson said, but his is the smallest department on campus, and the cuts have a huge ripple effect that is diminishing the black studies program.

“They say we’re not growing and there’s no evidence we need more,” he said. “They say we don’t have lots of majors and minors, but that’s actually not the case.”

Johnson says “there is no excuse” for the university to not invest more in his department, which can’t be expected to grow if it’s not supported.

“You can’t grow unless you have the capacity to grow,” he said.

For PSU to claim that it has a supportive campus for diversity is disingenuous, Johnson said, and the school should step up and do the right thing by hiring more instructors for black studies.

Hiring five or six more instructors would allow the black studies department to add more courses to the curriculum to attract more students, which would help the program grow, he said.

“It’s hard to complete majors sometimes because courses aren’t offered,” he said. “I’m not trying to throw dirt. I’m only concerned about growing our department.”

--This story was corrected from an earlier posting.