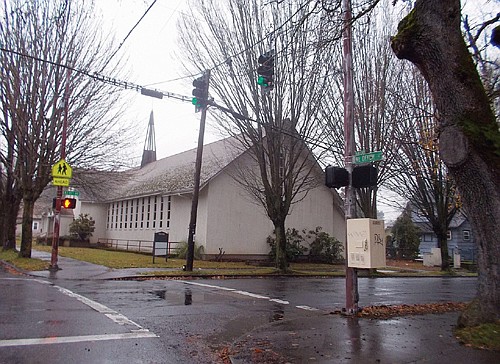 Albina Head Start has negotiated the successful purchase of the Woodlawn Methodist Church at Northeast 15th and Dekum thanks to supporters who provided free legal services and the church which offered to sell the property at a discount so that the nonprofit education and community building organization can continue to house its Tina Clegg Albina Early Head Start and Head Start Center at the site along with other services. Photo from Wikipedia Commons

The presence of Albina Head Start in Portland’s diverse Woodlawn neighborhood will continue thanks to the successful purchase of the Woodlawn Methodist Church at Northeast 15th and Dekum, providing a permanent home for the organization to serve low income residents from the African American community and other disadvantaged populations.

Thanks to footwork by the nonprofit’s pro bono law firm and support by church leaders to sell the property at a discount to maintain its community use, Albina Head Start becomes the new owner of the site and its long-running Tina Clegg Head Start and Early Head Start Center can remain operating and grounded to its roots.

Ronnie Herndon, director of Albina Head Start, said the building also houses administrative offices for Head Start community programs, coordinating and providing other services for many additional families. The work includes child growth and development services and education to strengthen and enhance the abilities of children and their families to successfully function in life.

Five Albina Head Start centers in Portland currently serve close to 400 children from birth to age five and their families.

In an earlier letter to the community, church spokesman Greg Nelson said the conference decided to not start another Methodist church in the location to take Woodlawn United’s place and to sell the property. Nelson wrote that the conference was “especially mindful of the decline of communities of color” and would give preference to nonprofit groups, but at the same time, the sale had to safeguard “the donations and assets of the church.”

Supporters of community use were worried the church property would be lost to commercial re-development. And finding a suitable replacement building was a daunting task considering the difficulty of locating affordable space in Portland’s competitive commercial real estate market that would not be too far away for those in need of services. Many low-income people have trouble finding transportation which creates significant barriers to vital services.

That worry was increased in mid-May when real estate agents started actively advertising the building on the open market, even though a May 1 letter from the church conference spokesman stated that it would prefer to sell to a nonprofit. Herndon said the move raised alarm bells since both Albina Head Start and the nonprofit Deliverance Center had made their own purchase inquiries and were waiting for answers.

But thanks to the help of Owen Blank of Tonkon Torp, the Albina Head Start’s long-time pro bono law firm, Albina was able to secure some off-cycle grants from local community foundations in a short time frame. And the firm quickly helped Albina Head Start sign a Letter of Intent that included a “no-shop” clause, which ended the active marketing of the property.

Finally, a below-market purchase price was agreed upon this summer and the sale recently closed, according to a news release from Tonkon.

Although fundraising is not a typical role for the Tonkon attorney, Blank initiated successful conversations within his own network of contacts which, along with Albina’s efforts, helped pave the way for Albina to raise more than the minimum required down payment from several Oregon-based foundations, Tonkon officials said.

Herndon said the work of Blank and his firm was indispensible but also reliant on community support, for which he is grateful.

“I think this is a major victory for the community,” he said. “With everything that’s happening with gentrification, this means that building will be able to continue to serve literally hundreds of low income children. Were it not for community support, we could not have accomplished this.”