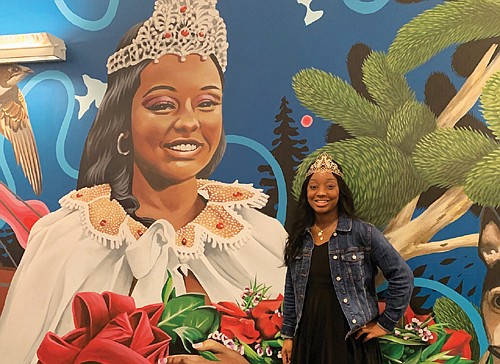 Rose Festival Queen Mya Brazile is one of the featured images in a new street art mural created by local artists Alex Chiu and Jeremy Nichols for the north pedestrian tunnel at Portland International Airport.

Wearing the official Crown of Rosaria, rarely seen in public outside of the Coronation, Queen Mya and Rose Festival staff joined the dedication last Wednesday and toured the mural featuring Ms. Brazile's larger than life image.

The likeness, taken from her crowning moment in the 2019 Rose Festival Coronation ceremony, it is one of many of images representing "diversity, family, sharing food and nature," that travelers will appreciate while coming and going along the lengthy airport passage.

Chiu, a second generation Chinese-American said his art is about redefining what being American means. “America is a nation of racial diversity, immigrants and refugees, different languages, different spiritual beliefs, and different cultural practices. I want to celebrate our differences. I want people to relinquish their fears of the “other.” My art is about breaking those barriers.”

Nichols, who grew up traveling between upstate New York and Tokyo, his birthplace and his family’s home country, said he brings an “outsider looking in” approach to his artwork to give the viewer a sense to how he feels and sees the world around him.