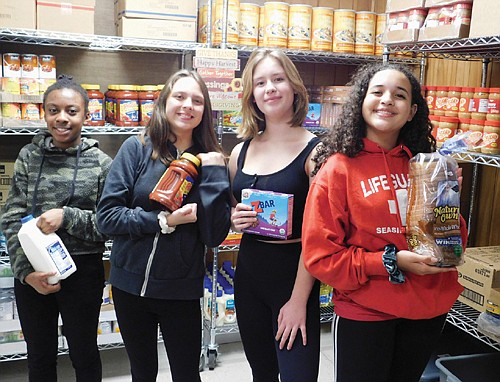 Students from Ockley Green Middle School in north Portland volunteer to help run the school’s Dragon Mart, a free food bank benefiting kids who don’t have enough to eat as well as assisting other families and people in the entire neighborhood. The students pictured are (from left) are Shamaya Daniels, Addyson Razo, Beatrice Pierson and Ilyarah Moteley. Photo by Beverly Corbell

Camberg’s organization, the Sunshine Division, was started back in the 1920s as a relief organization for police officers who lost their jobs during the Great Depression, and carries on to this day, providing food and clothing for anyone in need at two locations, 687 N. Thompson St. and 12436 S.E. Stark.

Temple, director of public affairs for Fred Meyer, said the goal of Dragon Mart -- to relieve food anxiety not only for students but for those in the neighborhood in need -- is also a goal of Freddy’s.

“This is a great project and we’re excited to underwrite and fund it,” Temple said. “It’s part of our social impact plan, to end hunger in the neighborhoods we call home by 2025. Hunger is a real issue in schools and we were looking for a school partner eager to develop a solution like this one.”

“We were able to work with the school and Sunshine Division to develop a solution to keep kids and families fed not just for one weekend, but year-round,” Temple said.

Temple said credit for funding the program goes to the cashiers at Fred Meyer who started the Hunger Roundup Program where they ask customers if they want to contribute along with their purchase.

“This is because of the cashiers who launched the Hunger Roundup Program, and because of that we are able to fund these kinds of projects,” he said. “It connects the dots between community and solution.”

While Fred Meyer provided funding and the Sunshine Division provided logistics, the actual store is run by Joyce Olivo of Self Enhancement, Inc., the nonprofit deeply rooted in Portland’s African American community and dedicated to helping youth reach their potential.

In the past, the school has had backpack programs where kids can take home a backpack full of food at the end of the week, but even that had a certain stigma, which having a store helps remove, Olivo said.

“We don’t want to call it a pantry, to take that stigma away, and we use Fred Meyer shopping bags,” she said.

Dragon Mart opened during the first week of the school year, Olivo said, and is currently feeding about 20 families per week.

“That’s not including the kids who come in during the week to get additional meals or food,” she said. “The first day we had 15 students and families but the numbers are definitely growing, once word gets out.”

Although Fred Meyer has worked with other schools to provide food for homeless students, Temple said the program at Okly Green is essentially a pilot program that could be start at other schools.

“We’re looking to get proof concept and hopefully find other companies who want to get on board and keep these programs sustainable,” he said.