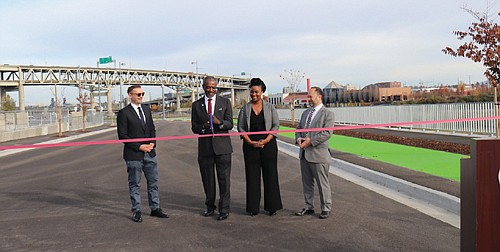 One third of a mile in length, the street supports the continued build-out of South Waterfront and the OHSU Schnitzer Campus, including the recently completed Knight Cancer Research Building and drastically improves access to the medical offices, other new buildings and four future development sites between the Marquam Bridge and Tilikum Crossing.

“We are pleased to celebrate the opening of this important South Waterfront connection,” said Prosper Portland Commissioner Dr. Alisha Moreland-Capuia, during the Nov. 14 ribbon cutting ceremony. “Moving forward, we will continue to work with city bureau partners and the community to determine how best to deliver on the priorities of affordable housing, regional streets, the greenway, parks, and a strong employment base.”

“OHSU has grown over the last hundred years because our missions of research, health care, and education remain critically important to the health of Oregonians,” said OHSU President Dr. Danny Jacobs. “Like the research we do at the Knight Cancer Institute and our other centers of excellence, the more discoveries we make, the more we can do to help Oregonians and people everywhere live longer, healthier lives. This road provides critical access for those who come to OHSU to learn, make discoveries, and seek care.”

The newest OHSU building, the Knight Cancer Research Building, is a state-of-the-art facility focused on early detection and treatment of cancer. The $11.6 million city investment in Bond Avenue served as the city’s contribution to the Knight Cancer Challenge, in which philanthropists Phil and Penny Knight promised a donation of $500 million if the public sector could raise the same amount. Former Mayor Charlie Hales made this commitment to infrastructure in response to the challenge.

Once complete in its entirety, Bond Avenue will become a “couplet” with Southwest Moody Avenue handling southbound car and bike traffic. In the interim period, phase one will create a shortcut between the Tilikum Crossing and downtown Portland for pedestrians and people biking or scooting. It will also extend the Willamette Greenway path, allowing people to walk, ride, jog, or roll from the Tilikum Crossing to the Broadway Bridge–a distance of 2.2 miles–completely separated from car traffic.

Bryan Guiney, Business Oregon’s regional economic development officer for the Portland Metro Area, said the infrastructure development by PBOT, Prosper Portland and OHSU, in addition to the commitment by OHSU to create 225 new jobs and retain 315 existing jobs while growing the advanced manufacturing and biomedical industry cluster, are all key to growing and diversifying the state's economy.