Cannabis Business Gets a Boost 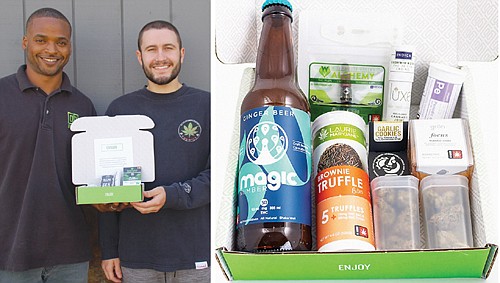 Adrian Wayman (left), the minority owner of a unique cannabis dispensary in Portland called Green Box, and his employee Spencer Gray and one of their “green boxes” of marijuana products for home delivery, the first business of its type in the state. Green Box was a recent recipient of a grant underwritten by Prosper Portland to bolster minority-owned films in the legal cannabis businesses. Photo by Beverly Corbell

When Adrian Wayman was a high school student in Georgia, he and a handful of friends were waiting for the bus when a group of police officers approached them, searched them, and then arrested them all because Wayman had a little bit of cannabis flower in his backpack.

“We were just a group of black teens, not doing anything wrong, not using anything and we didn’t give them reason to search us,” he said.

The arrest branded Wayman as a criminal. He was put on probation for two years, had to do 100 hours of community service and “spent lots of money” on fines. He was left, he said, with a record of having possession of a controlled substance, which he then had to disclose when looking for a job or an apartment.

Wayman hasn’t looked into expunging his record because marijuana possession is still a crime in Georgia, he said. And he doesn’t care now because he has his own legal business selling marijuana in Portland.

Wayman’s cannabis dispensary, Green Box, is Portland’s “first best weed delivery service,” where customers can sign up for delivery of a different box each month that contains a combination of edibles, flower, vape pens, extracts, concentrates and more.

Starting a new business is always a struggle, but Wayman, who opened shop two years ago, got some help from a project of Prosper Portland, the city’s economic development agency. A nonprofit called NuLeaf Project PDX was selected as the provider for the city agency’s Cannabis Business Development Equity Program. Its purpose is to encourage entrepreneurs from communities of color, people who have been negatively impacted by the so-called “war on drugs.”

NuLeaf is in its second year of operation and this year awarded grants of $30,000 each to Green Box and another cannabis retailer, Green Hop, which has a hip-hop theme. The grants are funded through cannabis tax revenue.

The grant has been a tremendous help, Wayman said, allowing him to hire Spencer Gray as an assistant and do a major upgrade to his website.

Minorities were “disproportionately targeted by cannabis criminalization,” said NuLeaf Executive Director Jeannette Ward Horton, and entrepreneurs of color have even less access to money in a industry that can’t get traditional funding through banks.

Green Box’s business has grown by 143 percent, Horton said, because of the grant.

“The city’s done a good thing by investing these tax dollars in these businesses and we’re seeing a direct line to actually help people harmed by the war on drugs,” he said.

Nationwide, only 2.7 percent of plant-touching cannabis businesses have majority ownership by African Americans, according to Horton.

Prosper Portland’s investment in the NuLeaf project is in its second year, and this year it has increased its funding to $210,000. That means more grants will be available next year, Horton said.