A Portland favorite with an original dish each day 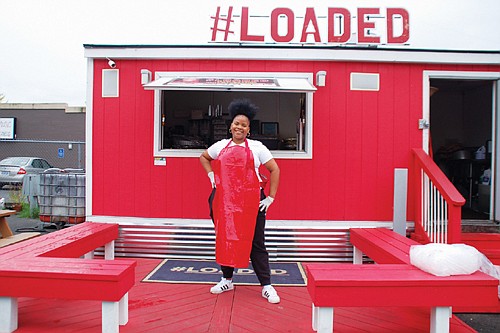 Kiauna Nelson, owner of Kee’s #Loaded Kitchen, Portland’s most favorite food cart as rated in a reader poll by Willamette Week, gets ready to serve one of her original dishes of the day at 3624 N.E. Martin Luther King Jr. Blvd. Photo by Beverly Corbell

Kiauna Nelson, owner of Kee #Loaded Kitchen food truck at the corner of Northeast Martin Luther King Jr. Boulevard and Beech Street, really wants people to enjoy the delicious soul food dishes and desserts she has made a signature for good eats. She doesn’t believe in small portions, preferring to keep customers happy with big plates of satisfaction. She also doesn’t post a menu, concentrating instead on a unique meal every day.

“Today it’s barbecued wings, homemade mac and cheese and sweet potato pie,” she said. Some daily lunch combinations are repeats, she said, but she doesn’t post a menu because she doesn’t want her offerings to grow stale.

“When you cook the same thing every day, it can lose quality,” she said. “And I don’t want that.”

Nelson has been in business for three years and in her present location for the past two years.

As she spun around the food cart’s small kitchen, which has bench seating outside, she quickly chopped up a half dozen onions before stirring a big pot with what will become the cheese sauce for the mac and cheese. She does have one daily staple, serving fried chicken every day.

Nelson said she learned a few things about cooking from her mother – like how to chop up an onion really fast -- but most of what she learned came from the many cookbooks she perused, long before the Internet.

“I didn’t just read the recipes, I read the fine print,” she said, adding that she learns better by reading rather than watching someone else prepare a dish.

Most of her business comes from people who find her online, Nelson said, through her Facebook page, Kee’s #Loaded Kitchen, or on Instagram at KeesLoadedKitchen.

Kee’s #Loaded Kitchen was named Best Food Cart by Willamette Week in 2018, and this year came out on top in the newspaper’s Best of Portland Reader’s Poll. The food cart has mostly five stars on Yelp, with comments similar to this ecstatic review: “We have been to Kee's Loaded Kitchen a few times. Every time the food and the service hits it out the park. The meat is cooked perfect, the sides are delicious and the dessert is always bomb. Her portions are huge. You could share, but nah...”

When asked about people who only eat small portions, Nelson joked, “Maybe this isn’t the place for you!” But customers can always ask for to-go containers, she said, and perhaps only half kidding, added, “Smoke a lot of weed before you come, and then you’ll be hungry enough to finish it!”