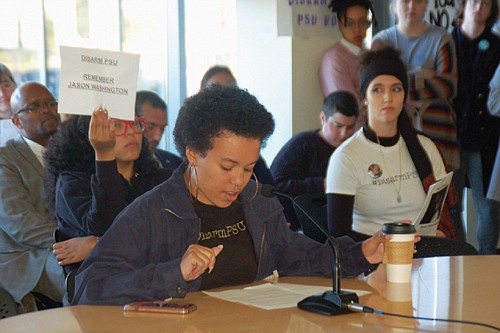 Portland State University alumna and graduate student Olivia Pace addresses the PSU Board of Trustees Thursday to strongly criticize the university’s decision to continue arming campus police with guns. The decision, part of a new campus safety plan, follows the first ever PSU officer-involved shooting that killed a black man breaking up a fight outside a bar near campus last year. Photo by Beverly Corbell

The decision over whether Portland State University campus police can continue to carry firearms has been put to rest, and the answer is, yes, they can.

Following a contentious PSU Board of Trustees meeting Thursday and a controversial 2014 decision to arm campus police in the first place, Stephen Percy, PSU’s interim president, issued an 18-page report outlining details for keeping students safe on campus that calls for more training, more types of responses to emergency or critical situations, and the ability of campus police to keep their firepower.

The decision was based in part on a 210-page report by Margolis Healy and Associates that was issued in February and one that makes 115 recommendations related “to campus safety policies, practices, training, recruitment, hiring, facilities and technology.”

Percy’s report, “A Holistic Plan for Campus Public Safety at Portland State University,” was in response to the first-ever PSU campus police shooting on June 29, 2018 when Jason Washington, a black father, postal worker and U.S. veteran, was shot to death by campus police when he tried to break up a fight outside a bar near campus while armed with a legal gun. PSU decided to arm its public safety force in 2014 in a decision that was loudly opposed by students and faculty at the time.

The tragic death of Mr. Washington shook the PSU campus to its core. It prompted the University to reexamine campus safety systems.” The report can be viewed at pdx.edu/president.

James Dewey and Shawn McKenzie, the two officers involved in the shooting, have left the campus security force. Michelle Washington, Jason Washington’s widow, notified the university of a pending

Tears flow as Michelle Washington, widow of Jason Washington, the black father killed by Portland State University campus police while responding to a fight outside a bar near campus last year, tells the PSU Board of Trustees how painful it is for her and her daughters to go through life without him.

lawsuit against the university in June on behalf of herself and her three daughters.

Michelle Washington spoke tearfully at the Board of Trustees meeting before Percy released the new report in a room filled with student protesters holding signs and visibly uncomfortable board members.

Washington described how difficult life has been since her husband’s death.

“I honestly don’t know how to go on without him and I’ve worked so hard to try and make people understand what it’s like to go through this,” she said. “I know the decision’s been made, and there’s nothing we can do, but I pray that one day you guys change your mind, hopefully sooner than later so this doesn’t happen to anyone else.”

Olivia Pace, a PSU graduate who said she’s been calling for campus police to be disarmed for more than five years, told the board she was “disgusted” by the decision.

“I still have to be here,” Pace said. She called the interim president’s action to allow campus cops to continue to carry guns “unpopular, undemocratic and racist.”

Pace said she did not condone Percy’s safety plan and said arming campus police will only lead to more tragedy.

“Jason Washington was just a black man trying to break up a fight involving a firearm. He was not a threat, he wasn’t doing anything wrong, and he was still killed by the police,” she said. “The right we have to live and breathe is extinguished with your decision. The decision to arm security will be paid in black lives.”