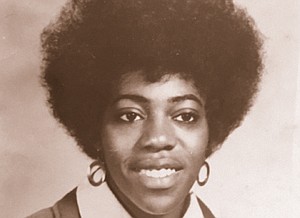 Cheryl Dawn James, born May 29, 1953 in Portland, was a strong-willed, beautiful woman, lovingly nicknamed "Sir" by her younger brothers and sisters because of her orderly and exacting ways. As a young, black girl coming of age in the late 1960s and early 1970s, she was well aware of the injustices both she and her family faced in the predominately white city. She did not actively engage in the civil rights or anti-war movements that were overtaking the news at the time, but read the bible and loved the Lord to keep her pulse on changes happening in society. As one of the elder children in her family, she helped keep the household running smoothly, assisting her beloved mother Mary Lee with her younger brothers and sisters and chores.

She was a good student at Jefferson High School, where she graduated with honors in 1971. Her graduation, however, was not an ordinary one, and events from that time went on to define the course of her life.

After walking across the stage to receive her diploma, she was met by police officers with handcuffs. They were there to escort her to an adult prison where she would serve an 18 month sentence. Several months earlier, her older brother had gone AWOL from the Navy. On Jan. 4, 1971, four plain clothed federal officers entered the James home unannounced and without a warrant to arrest him. She was in the kitchen preparing dinner, while many of the younger James children were gathered in the living room. Upon seeing her 14-year old brother being choked by an unknown white man, unable to breathe and turning blue, she grabbed the rolling pin she was using to make biscuits. She rushed to her brother’s aid and struck the man on the head, releasing him from his grip. Solely an act of protection, this resulted in a federal assault conviction. During her incarceration, she was raped and impregnated. Her case received media attention both locally and nationally and her sentence was eventually commuted with the help of her attorney, Nick Chaivoe and a defense committee comprised of concerned members of the Portland community. But no investigation into her prison assault was ever made.

Stalwart and strong, Cheryl moved on with her life, working for the IRS as well as Emanuel Hospital. In the neighborhoods of north Portland and Vancouver where she raised her family, she was respected by all for her strength and unflappability. For all of her bravery, however, the trauma she faced in her young life took its toll. The promise of a smart and confident girl was inextricably hurt by the stigma and prejudice of being a black woman in Portland and a convicted felon. She had wanted to become a lawyer, and to help those who faced similar obstacles, but the harsh realities of her life got in the way. Cheryl did the best she could, staying strong until the end.

She deeply loved her sons Morrice, Daniel, Kalam, and Felton Jr., as well as her large extended family, including many nieces and nephews that fondly remember afternoons at Aunt Cheryl’s house and the video games she allowed them to play when she wasn’t playing them herself. The Temptations and Marvin Gaye were heavily featured in her vinyl collection and she would never miss a chance to dance to “I Gotcha” by Joe Tex. Though she never married, Cheryl was adored by her lifelong partner Felton Thompson Sr., who worked as a driver for TriMet for over 25 years. When he suffered a debilitating stroke, Cheryl, though ill herself, became his primary caregiver. Skilled as a nurse, she put aside her own medical issues to care for those she loved. Cheryl was a survivor who bravely took on whatever life dished out until her very last breath. A GoFundMe site has been set up to assist her family with funeral expenses. (gofundme.com/f/cheryl-dawn-james-memorial-fund) For more information about Cheryl James’ story, an article will be published in the Spring 2020 edition of the Oregon Historical Quarterly.