Profile Theatre makes the writers of original plays its focus 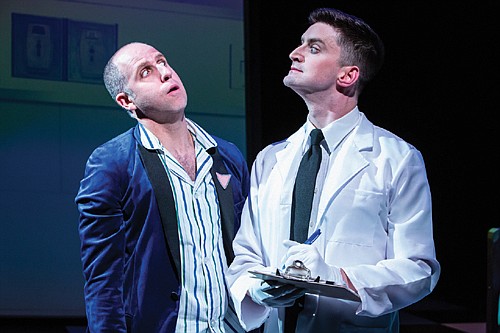 Portland's Profile Theatre makes the writers of original plays its focus, delving each season into the work of one or two playwrights. This season brings a focus on the great Paula Vogel, whose play "Indecent" so won my heart at the Oregon Shakespeare Festival this past season. Profile, too, will mount a production of "Indecent" later this year--but first, it has produced "The Baltimore Waltz," which was the play that first brought Vogel to national prominence and earned her an Obie Award for Best Play in 1992.

It's a tricky play to produce, perhaps more so than when it premiered in the early 1990s. It was inspired by the loss of Vogel's brother Carl to AIDS--but unlike more direct and polemical approaches to that subject matter (such as "Angels in America" or "The Normal Heart"), Vogel's play is more indirect and personal. She and Carl had talked about traveling to Europe together but missed the opportunity before he got sick. Rather than directly depict her brother's illness, Vogel circles it with an imagined and often broadly comedic trip to Europe between a brother and sister, Carl and Anna, inspired by learning that the sister is terminally ill with a newly discovered terminal illness that the public health system can't seem to find a reason to prioritize.

Vogel's more fantastical approach captures a sense of the chaos of the early AIDS crisis--the feeling of unreality, the senselessness of people dying for no reason, a lack of concern among medical providers--but those aspects of the crisis were more accessible for audiences who experienced that sense of chaos back in the late '80s and early '90s than for audiences looking back from this distance. Vogel has scrambled the elements of her and her brother's experience in a way that is literarily and psychologically interesting but that makes the play harder to access than it may originally have been; in this production, at least, despite an inventive set design, it's a little hard to decipher that the trip to Europe is all a fantasy in Anna's head while the play is actually taking place in Carl's hospital room.

That said, the cast of three is strong. Jen Rowe is a fierce Anna, capturing a sense of frenzy that seasons the play's humor and also holds some of the desperation that attends the loss of a beloved brother to a senseless illness. Dan Kitrosser is a gentle Carl, ironic and a bit mysterious; Carl doesn't tell us everything and is carrying some secrets, including from Anna. Joshua Weinstein is a nimble Third Man, shifting roles from doctor to waiter to mysterious stranger to a series of lovers for Anna, alternating from cold to comic to seductive. The play asks a lot of the cast and especially Weinstein, who must shift shapes and moods as Anna dodges and struggles with the reality of losing Carl.

It's a quirky play that works better in memory than in the moment, not unlike how the brain circles and dodges and dances around a painful experience. This production will keep you laughing and leave you with lots to chew on. “The Baltimore Waltz” is now showing through Nov. 3 at Imago Theater.

Darleen Ortega is a judge on the Oregon Court of Appeals and the first woman of color to serve in that capacity. Her movie review and theater arts column Opinionated Judge appears regularly in The Portland Observer.