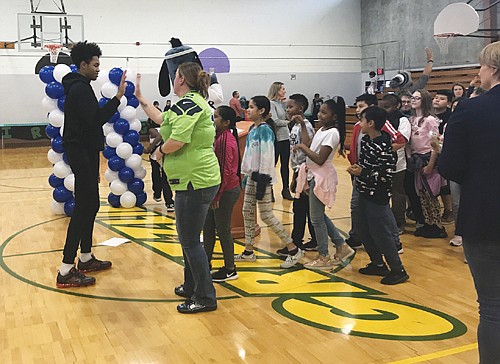 Portland Trail Blazers shooting guard Anfernee Simons attends an assembly at Glenfair Elementary in the Reynolds School District Friday to dedicate new gym equipment, a new coat of paint and other improvements made possible by a grant from United Health Care.

The Trail Blazer’s top pick of the 2018 NBA draft and a young guard poised to become a household name in the NBA took time to give back at Glenfair Elementary School Friday when he attended a dedication of new gym equipment from United Health Care of Oregon. The diverse school at 15300 N.E. Glisan St. is in the Reynolds School District.

Anfernee Simons, 20, spoke to the students and school community about the importance of getting physical activity in different ways for good health and achieving in sports. He also picked up a basketball to play a game of knockout. Simons adopted the school as part of his “Dreambuilders” program.

Simons is entering his second season in the league and with the Blazers this fall. Local media and Blazers fans have been giving him a lot of praise of late saying he is playing with an unbelievable amount of confidence, showing no fear in the preseason with his enthusiasm and skills.

Blazer executive Neil Olshey called him "the best young guard in the league" and as gifted a player as anyone he has drafted in 15 years in the NBA.

A $22,000 grant from United Health Care is funding the new gym equipment including a rock-climbing wall, new basketball backboards and a fresh coat of paint throughout the entire space.