Something for Every Taste 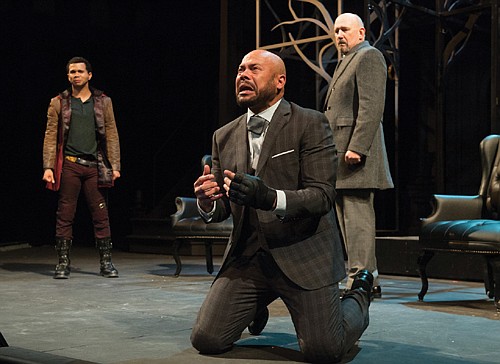 As the long season of the Oregon Shakespeare Festival nears it close, I don’t want to miss the opportunity to offer five more reasons to head to Ashland, along with my previous take on the other six shows. There is something for every taste, and also plenty of opportunities to stretch your mind and broaden your tastes.

Three shows run on the outdoor stage through the second weekend in October. Smoke from local fires has complicated programming in the outdoor stage in recent years, and for part of this summer performances have been moved to a smaller indoor theater—but for the rest of the season you should be able to catch the outdoor shows on the stage under the stars where they were meant to be seen.

My favorite of the three is “Alice in Wonderland,” director Sara Bruner’s loving take on the classic tale of confusion and delightful nonsense. Bruner, in her first turn as an OSF director after four brilliant seasons in the acting company, has found a particularly resonant way into this material that has stuck with me since I saw it back in June. She has located in Alice the important quality of curiosity—and as played by the fierce and resolute Emily Ota, this Alice embodies curiosity as a superpower. As her path takes her on the most confusing of journeys, Alice greets each moment of disorientation with a genuine impulse toward inquiry. As gamely played by a host of talented OSF veterans who know how to communicate through not just words but inventive movement (assisted by the clever movement direction of Jaclyn Miller and the music of Cedric Lamar), the trippy characters Alice encounters challenge her with everything from intimidation to whimsy to dizzying illogic, yet she remains relentlessly inquisitive. I have reflected on Ota’s portrayal often in the past few months; she and Bruner’s buoyant production have helped me to see Alice as an inspiring hero, and to give curiosity its due as the superpower that it is. This production plays through Oct. 12.

Mexican-born director Jose Luis Valenzuela has been a treasure of American theater and a leader among Latinx theater artists for decades—and he is a director who inspires loyalty and admiration from actors. His unmistakable touch shows in the visual beauty and artistic intention evident in OSF’s production of “Macbeth,” which scrimps on neither violence nor gorgeousness. Aided by a stellar cast, Valenzuela envisions a back story for the famous Scottish conspirators which, though not excusing their hard turn toward extreme lethal ambition, makes some sense of it. The chemistry and talent of Amy Kim Waschke and Danforth Comins as the lead couple grip your attention even as their characters descend into the despicable carnage of their ambition, and the witches in this production (the amazing Erica Sullivan, Miriam Lauren, and Robin Goodrin-Nordli) are especially interesting; although I have not seen this view echoed elsewhere, their arresting energy struck me as less clearly malevolent than caught in the tragic tendency of ambitious humans to attempt to leverage prophetic insight in directions it was never meant to go. This production plays through Oct. 11.