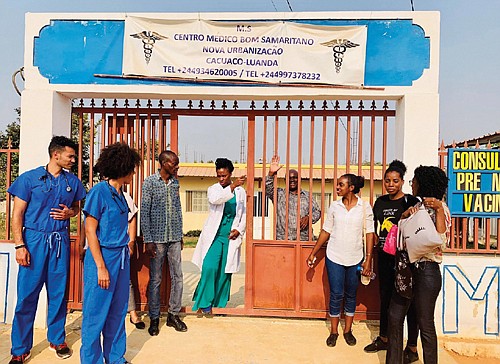 Dr. Alisha Moreland-Capuia, executive director of Oregon Health and Science University’s Avel Gordly Center for Healing and assistant professor of psychiatry at the OHSU School of Medicine, opens the gates to her Good Samaritan Health Care Center in Angola, joined by patients and clinic personnel. The Portland native and other members of the Capuia family founded the non-profit clinic. Photo courtesy of the Capuia Foundation

Monique Hedmann just had an experience she’ll never forget. She and two other medical students of color were able to join a mission this summer to bring hope and medical care to a beloved global community by spending time at a health care center established by a Portland-based foundation in Angola, on the southwestern coast of Africa.

Daniel Capuia (second from left) and his wife Dr. Alisha Moreland-Capuia (center), founders of the Portland-based Capuia Foundation, gather with the three future doctors who joined them in Africa this summer where they got valuable experience at a nonprofit medical clinic started by the Capuia family. Monique Hedmann (far left) and Shane Hervey and Kelley Butler (right) are the medical students pictured.

The catalyst that led to the international visit was Dr. Alisha Moreland-Capuia, executive director of Oregon Health and Science University’s Avel Gordly Center for Healing and assistant professor of psychiatry at the OHSU School of Medicine.

Moreland-Capuia, who is described as a physician, scholar, educator and orator at OHSU, is known for the voice she gives to increasing access to quality health care here at home and for people in Africa. She gives speeches about her foundation and work in Angola, and it was after hearing her speak, at different times, that the three students from Oregon and California felt moved to get involved to the point that Moreland-Capuia became a close advisor to all three.

“During my first year of medical school Dr. Alisha spoke to my class and she has been such a mentor,” Hedmann said. “To do this with her, it’s amazing, a dream come true.”

Although they were in Africa for only a week, the experience was profound for Hedmann and the other students, Kelley Butler and Shane Hervey.

“I found new confidence in myself as a black woman in Africa — it was an all-encompassing hug,” Butler said. “I came back with self assuredness as a black woman and a future physician; it was so involved and so personal.”

Hervey, a third-year medical student at OHSU, said his first international experience made a distinct impression on him.

Butler, a fourth-year medical student at the University of California Irvine, was visiting Portland a couple of years ago when she and Hervey went to hear Moreland-Capuia speak at OHSU, and the pair built “a really meaningful connection” with her and, years later, accepted her offer to go to Angola.

In the more than five years since the Good Samaritan Health Care clinic opened in Cacuaco, outside the capital of Angola, it has seen between 800 and 1,100 patients annually, according to Daniel Capuia, Moreland-Capuia’s husband and her co-founder of the Capuia Foundation, a fundraising arm for the nonprofit clinic.

The couple met when they were students at Jefferson High School. Alisha is an Oregon native, and Daniel’s family left Angola for Oregon in the mid-1970s because of unending war.

Angola gained its independence from Portugal in 1975, but then the country erupted in a civil war that didn’t end until 2002. It was then that Daniel’s father, Estevao Capuia, was urged to go back home and help rebuild his country. He had previously been a supervisor of veterinary services at a veterinary hospital.

But before he went, Estevao Capuia visited his son and daughter-in-law in Washington D.C., where Moreland-Capuia was working toward her medical degree at George Washington University School of Medicine at the time. The three sat at a kitchen table and agreed that the most pressing needs in Angola were the development of agriculture, education and health care, but couldn’t agree on which should come first. His daughter-in-law, not surprisingly, said a health clinic should come first, but no consensus was reached.

The elder Capuia then visited Angola for a month, but while he was there he had an accident that resulted in an open fracture of his finger. He went to a government hospital, just to learn that they had no supplies or antibiotics, which after a 10-hour search, he was finally able to secure. That was enough to change his mind.

“When he got back to DC, he had an emergency procedure,” Moreland-Capuia said. “Then he sat at the same table and said, ‘Remember our conversation? I think you’re right about a clinic.’ ”

The clinic is a reality now, but it wasn’t easy to get off the ground because the Capuia family didn’t want to risk outside influence or the possibility of corruption, even ruling out help from the International Monetary Fund and the European Union.

“So 18 of us formed a foundation,” said Moreland-Capuia. “We didn’t want NGOs (non-governmental organizations) or the government involved. We wanted it to be a family affair.”

Moreland-Capuia said that 99 percent of funding goes straight to the clinic, which employs one physician, Dr. Andre Miranda, two nurses, one medical technician and one midwife.

Nurse Joana Ribeira-Alves (left) meets with Dr. Alisha Moreland-Capuia of Portland at the nonprofit Good Samaritan Health Center in Angola started by the Portland-based Capuia Foundation. Ribeira-Alves has been with the clinic since it opened five years ago.

The exterior of the newly-built healthcare clinic in Angola founded by Portland physician Dr. Alisha Moreland-Capuia and her family-based Capuia Foundation. This past summer, Dr. Moreland-Capuia brought three medical students from Oregon and California to the African country to spend a week at the clinic treating patients as part of their training as future doctors.

“The clinic was literally built one window at a time, one door at a time, and everyone with the last name Capuia made a contribution, whatever they could,” Moreland-Capuia said.

It wasn’t just a matter of putting up a building, though.

“We definitely built this with the community; we didn’t just impose it,” she said. “We had to do infrastructure — water and lights — and all the employees are Angolan, to help build the local economy. We’re proud of the model.”

Moreland-Capuia is also proud of the three students. Both Butler and Hedmann have master’s degrees in public health, and Hervey is thinking about going into pediatrics. But moreover, they are now ambassadors for the clinic in Angola.

“The inaugural group,” she said. “They can open up to others and we will set up rotation (for future med school students) through OHSU.”

The Capuias also describe some of their motivations behind the clinic on a video on the clinic’s website, where Daniel Capuia talks about the turmoil in the country before his family left.

“It was chaos — there were bombings everywhere,” he said. “The Cubans were there and the Soviet Union was there and there was no way to stay. We had to flee.”

Daniel Capuia knows the path ahead will not be easy.

“Sometimes you have to look back to see where you come from. If you want to make a change, make a difference, that’s the route you have to take,” he said in the video.

When the clinic first opened, about 40 percent of patients could not afford an exam, he said.

“It’s now up to 90 percent,” he said. “My father was adamant — they will never be turned away if they can’t afford it.”

The clinic is the only full-service clinic in an area with a population of 550,000, he said, a staggering statistic. “It’s a lot of work, a lot of time and effort,” he said. “But it’s ‘heart work’ because we can see lives being changed and being affected.”

Creating the clinic has even wider implications for Angola, Moreland-Capuia said in the video, and the government has recognized that this model for health care is one the entire country can benefit from.

“We are the catalyst for a large transformative movement that we believe is happening in Angola,” she said.

To learn more about the Good Samaritan Health Care Clinic and the Capuia Foundation and to donate to the effort, visit the website TheCapuiaFoundation.org.