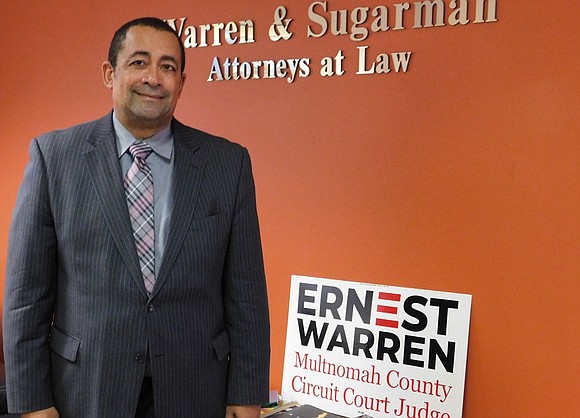 Portland Attorney Ernie Warren puts his 31 years as a lawyer heading up his own law firm and a lifetime of pursing justice issues as qualifications in a campaign for election as an Oregon Circuit Court Judge for Multnomah County. Photo by Beverly Corbell

Ernest “Ernie” Warren Jr., a seasoned Portland lawyer, passionate civil and criminal defense attorney, and long time advocate for pursing justice issues, is asking voters to put him on the bench for an open seat on the Oregon Circuit Court for Multnomah County, one of six candidates running in Oregon’s May 19 vote-by-mail election.

Warren has been a mainstay in Portland’s African American community since his family migrated here from Texas in the 1930s and ‘40s.

The Warren clan came to Portland from Pleasant Hill, Texas after mechanization took their farming jobs, During World War II, employment at ESCO Corporation, today a global manufacturer of metal parts, provided economic opportunity. By the 1960s, there were more Warrens in Portland than back in Texas, and like other second and third generation members of the black community, they were employed in many different professions.

In an interview the Portland Observer, Warren told how his father, Ernest Warren Sr., was a successful insurance broker. But far from coddling his son, the senior Warren was insistent that his son learn the value of work. From the time he was just 9 years old, while other kids were playing summer sports, Warren Jr. was expected to work and work hard.

Warren said he remembers joining his grandfather at the time, who would pick him up before daybreak, to go pick whatever produce was in season on local farms.

“So I know what it’s like to go out and pick berries and beans all summer long and have your hands all stained with dirt,” he said.

Warren said the values he learned growing up in a big close knit family formed the basis for his lifelong involvement in the community. In 1990, he opened the first African American-owned law firm in the state with the goal of “being a resource to the community, serving the common good and steadfastly pursuing justice.” He said he was inspired by the words of Martin Luther King Jr., “Injustice anywhere is a threat to justice everywhere.”

“I’m running because I want to be a person who maintains justice and always do what is right,” Warren said.

In his 31 years in practice serving a diverse clientele, Warren earned a reputation as a passionate attorney and successful trial lawyer. He has fought for affordable housing, for example, as a long time legal counsel for Portland Community Reinvestment Initiatives, Inc., the African American-led housing provider in north and northeast Portland.

Warren’s history with PCRI goes back to its beginnings in the early 1990s when hundreds of Portland families were left in the lurch by an unscrupulous mortgage company which scammed unsuspecting families out of their homes.

Warren said the late Gretchen Kafoury, then a Portland City Council member, came to him and asked him to represent — for free — a new nonprofit to rescue those properties and help people get their homes back. The mortgage company was eventually exposed in the press and was convicted of racketeering and fraud.

“That was an easy yes,” Warren said. Initially, he helped 49 out of 50 displaced people get their homes back, except for one owner who wanted to remain a tenant. He also helped PCRI acquire 300 other properties that had gone to default and rehabilitated them with help from the city through a community block grant.

Warren grew up in Portland, and first attended Jefferson High School before graduating from Sunset High School in Beaverton. He received his bachelor’s in economics and a master’s in business administration from Willamette University in Salem and finished law school at Arizona State University College of Law in 1988.

He mentions the years of experience representing people who can’t afford a lawyer and his help to other disadvantaged people, like those experiencing mental health issues, as examples of why he would be a good judge.

“I think people should vote for me because of what we’re trying to do now as a community with respect to affordable housing and getting the homeless off the streets,” he said. “I want them to know I really care about people and I would significantly take in every person’s individual circumstance into consideration.”

Warren said 95 percent of a circuit judge’s cases concern criminal law, and having handled more than 1,000 cases in court, including 100 homicide cases, he has plenty of experience as a criminal defense attorney. But he also wants voters to understand he also knows the prosecutor’s side of issues.

“People’s safety is my biggest priority,” he said. “You have to be able to evaluate the person who comes before you. It’s one thing to be in possession of a drug needle; it’s another to be charged with attempted murder. Are they a danger to the community or are they a flight risk? You’ve got to really assess that.”

Ernie Warren Jr., a candidate for Oregon Circuit Court Judge for Multnomah County and a lifelong advocate for justice issues, proudly displays the 2018 diversity award he received from the Multnomah Bar, the group representing all lawyers in Multnomah County.

Warren has won many awards for his work over the years. He said one that he’s most proud was being presented the 2018 Multnomah Bar Diversity Award. But instead of just accepting the honor, Warren gave the entire bar a PowerPoint presentation on why diversity is important — and profitable.

“I had received a study from the Massachusetts Institute of Technology where they got $1 million for researching diversity and found it was really profitable: Organizations that had both men and women working together was 40 percent more profitable than firms that just had homogenous groups of all men or all women,” he said.

Warren cited another study that looked at the diversity backgrounds of the 100 most profitable of Fortune 500 companies.

“Again, the most profitable corporations are the corporations that are most diverse,” he said. “God doesn’t make any mistakes, so that was my argument — diversity is profitable and morally correct.”