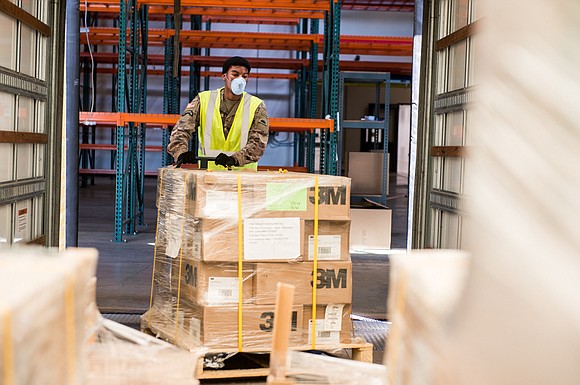 As the death toll from those who have died from the new coronavirus builds and more Oregonians are impacted with job losses and social distancing disruptions, Oregon Gov. Kate Brown announced Monday that Oregon will provide $8 million to the Oregon Food Bank, which is seeing increasing demand during the coronavirus pandemic.

The Oregon Health Authority reported one new coronavirus death in the state Monday, bringing the total number of people who have died from the disease to 53. The authority said that the person who died was a 66-year-old Washington County woman who had underlying medical conditions.

The authority also reported 57 new cases of COVID-19, bringing the state total to more than 1,580.

Also on Monday, medical personal protective equipment was distributed by the Oregon Army National Guard to all 36 counties in the state, its nine Tribal Nations, and two Tribal Health Agencies to bolster supply inventories as part of the ongoing response to COVID-19,

“These are your friends and neighbors putting on a uniform to help out in their local communities,” said Stephen Bomar, director of public affairs for the Oregon Military Department.

To address the impact on people with lost incomes who need food, the state will pay the Oregon Food Bank weekly as needed over the next eight weeks, Brown said. The state expects to receive a 75% reimbursement from FEMA, through the federal emergency declaration.

“In times of crisis, no Oregonian should need to wonder where they can find food for their family,” Brown said in a news release. “I know many Oregonians, through no fault of their own, have lost their jobs and incomes due to the COVID-19 outbreak.”

She said the Oregon Food Bank network, which includes 21 regional food banks and more than 1,400 food assistance sites, is facing a spike in demand while also seeing a significant decrease in food donations from commercial sources such as grocery stores as they experience higher demand.

Also Monday, officials in Oregon, Washington and California said they’ll work on a shared approach to re-opening economies while continuing to control the spread of the virus.

In a statement, Brown, Washington Gov. Jay Inslee and California Gov. Gavin Newsom said that while each state is building a state-specific plan, the three states have agreed to a framework that focuses on them working together, putting their residents’ health first, and having health outcomes and science guiding their decisions.