Says former VP has the character and experience 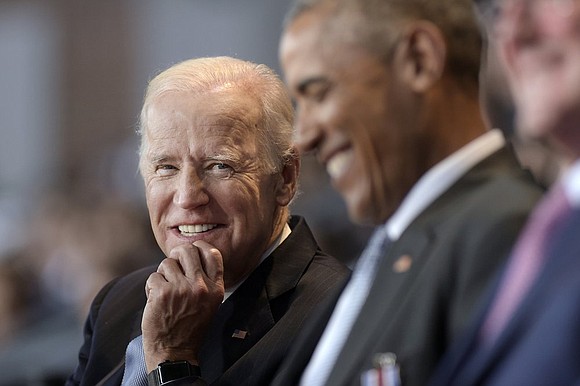 (AP) — Former President Barack Obama endorsed Joe Biden on Tuesday, giving the presumptive Democratic presidential nominee a boost from the party’s biggest fundraiser and one of its most popular figures.

“Joe has the character and the experience to guide us through one of our darkest times, and heal us through a long recovery. And I know he’ll surround himself with good people,” Obama said in a 12-minute video, touting Biden as a “close friend” and lauding him for his perseverance and compassion.

The endorsement marked Obama’s return to presidential politics more than three years after leaving the White House. He didn’t mention his successor, President Donald Trump, by name and instead sought to bridge the ideological divide among Democrats.

Obama spent a sizable portion of the video acknowledging the contributions of Bernie Sanders. The Vermont senator was the leading progressive in the Democratic primary and ended his campaign last week before endorsing Biden on Monday.

The former president called Sanders an “American original” and backed his frequent call for “structural change.” But he also acknowledged that while Democrats “may not always agree on every detail,” they must unify to defeat Republicans.

Biden now has the support of all of his former Democratic primary rivals except for Elizabeth Warren. The Massachusetts senator is expected to formally throw her support behind Biden soon, according to a person familiar with her plans.

Two other prominent Democrats who have yet to formally endorse Biden are former President Bill Clinton and Hillary Clinton, the party’s 2016 nominee. Hillary Clinton has been in regular touch with Biden, including several times since Sanders dropped out of the race, according to an aide.

Obama avoided intervening in the Democratic primary, but followed the race closely from the sidelines and is eager to take a more active public role in the campaign. He’s expected to headline fundraisers for Biden and public events in key swing states, if those events can still be held given social distancing guidelines during the coronavirus pandemic. An Obama adviser said the former president is taking his cues from Biden’s campaign on how he can be most useful as he eases back into a more overtly political role.

Though Obama stayed out of the primary, Biden frequently pointed to their time together in the White House. Biden often spoke of the “Obama-Biden” administration when talking about various accomplishments and referred to himself as an “Obama-Biden Democrat.”

But he also tried to insist he was running as his own man, telling anyone who asked that he urged Obama not to endorse him out of the gate or even in the thick of the primary.

Obama’s tenure became a sort of punching bag for some presidential hopefuls in a primary fight that early on was defined by a debate over the need for generational and systemic change versus a return to normalcy after the Trump era.