Activist stands out in field of 19 candidates 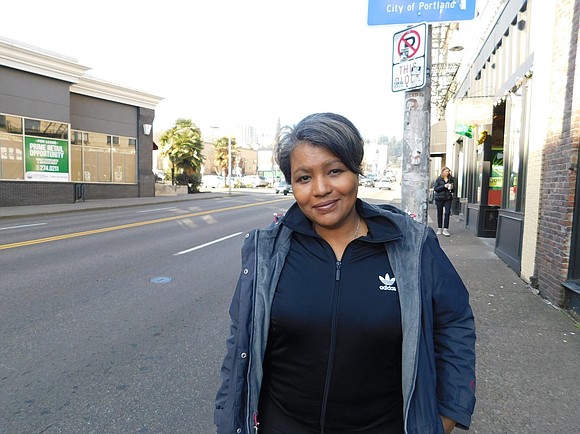 Teressa Raiford, founder of Don’t Shoot Portland, is in a crowded field in the race for mayor of Portland. She says she got involved as an activist candidate to bring change to Portland government, “We’re criminalizing poverty, we’re criminalizing brown people, we’re criminalizing mentally ill and disabled people and not doing anything about it,” she said. Photo by Beverly Corbell

After Teressa Raiford’s young nephew was killed by gun violence in 2010, she moved from Texas back to Portland, her hometown, and became a community activist to demand accountability for senseless gun deaths.

Raiford’s activism led to an invitation to meet former First Lady Michelle Obama at the White House. It was 2013. After visiting with Mrs. Obama she followed up the following year with the creation of the nonprofit Don’t Shoot Portland. By 2019, her organization was one of the top human and civil rights nonprofits in the city voted by a Willamette Week reader’s poll.

Now Raiford is taking her activism a step further and is running for mayor of Portland, joining a crowded field of 19 candidates, including incumbent Mayor Ted Wheeler.

Raiford said she became disappointed with Wheeler, the former State Treasurer and Multnomah County Chair, soon after he took the reins of Portland’s government, accusing him of isolating himself in office and creating an environment of distrust and dishonesty.

“We got somebody full of excuses that picked allies so that he wouldn’t have to be accountable or responsive to community members,” Raiford said.

“My priority is to communicate with communities, build civic participation and engage them on issues that matter to us, so that when outcomes happen people are part of the planning process,” she said.

Raiford had a rough childhood growing up in northeast Portland. She and her siblings were in and out of often abusive foster and group homes until they were adopted by her grandmother, she said.

As an adult, she worked in low level jobs at Nordstrom’s but moved to Dallas to get away from domestic violence, she said, and later found she had skills that were in demand at a major bank.

“I was in sales support, generating calls, and in six months I was the department manager,” she said. “When they came in with a new banking system, I picked it up fast and moved on up into deregulated energy in business services.”

After her unit was dissolved and she was laid off, Raiford went into business for herself.

“I started my own company called Genesis Mobile Tax, because I figured all this stuff they were teaching me I could use to help other people,” she said.

Raiford said her entrepreneurial and problem-solving skills would serve Portland well if she is elected.

“I love Portland and I love all our children and want to give them opportunities,” she said. “We haven’t given everybody those opportunities and I want to be the leader that makes that happen.”

The city is moving too fast creating “a globalized city of technology people,” Raiford said. “But if we’re building that city on top of our vulnerable community members, then we’re creating a crisis that we’re living in right now and it’s only going to get worse.”

Her concerns were expressed during an interview with the Portland Observer early last month, before the devastating losses of employment, the closing of schools, and public health crisis brought on by the coronavirus pandemic.

The city needs to do more to create jobs that lead to stable incomes and stable housing, Raiford said, and, if elected, she wants to do a complete survey of city services early on in her term.

“In the first 100 days, I want to bring in a team to audit the work that our bureaus are doing through the mayor’s office so we can see where those efficiency models can be supported and where we’re lacking in effective bridging or distribution of resources, how we can compromise to do better and what partners do we need to let go,” she said.

Raiford said the city is doing too many demolitions; that parks need more funding; preschools should be better supported; and the foster care system needs to be overhauled.

“In foster care, we were all abused,” she said. “It was systemic marginalization and it’s going to take systemic dismantling that in order for it to change.”

By the time her grandmother got custody of her when she was 13, she and her siblings had already been through a lot, Raiford said.

“By the time she got us back I had been raped and had a baby, my brother had been molested and was hanging out with gangs, and my sister had her second child by then,” she said. “It’s very devastating because you are normalized to be sexualized, to be abused, and I don’t want that to be anybody else’s experience.”

Raiford’s activism for Black Lives Matter and her own group’s protests over the killings of young black men by police got her arrested in 2015, when police claimed she was trying to start a riot. They lied, Raiford said, and she was eventually acquitted. Now she wants to see attitudes change.

Raiford said her life experiences give her the empathy and understanding that Wheeler does not have.

“Ted’s never been homeless or worried about where his next meal is coming from, or seeing his friends being killed and wondering if he’s going to die, getting kicked out of a home, the things that the majority of us deal with every day,” she said.

Raiford never found out who murdered her nephew. But said the reason she founded Don’t Shoot Portland was to hold the city accountable.

“We called it a community action plan against violence, all kinds of violence — hunger, racism, political violence — we’re anti all of that,” she said.

According to her website, teressaraifordformayor.com, by working with labor movements, nonprofits and other groups, Raiford’s focus will be on providing humane and effective solutions to the houseless crisis, fighting for living wages, doing the most for renters’ rights and creating true racial justice in our city.