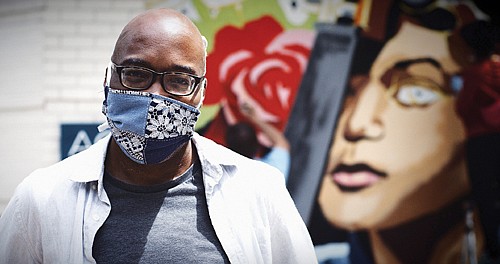 Portland pianist and composer Darrell Grant stands in front of a mural and the cover art for the digital recording and musical video “Take Flight,” a new original song he wrote featuring vocalist Michelle Willis.

Inspired by the resilience and courage of young Black lives in the face of the pandemic and the fight to end racism, Darrell Grant, Portland’s critically-acclaimed pianist and composer, has released a new digital recording and music video of an original song “Take Flight” featuring vocalist Michelle Willis.

The song will premiere on Grant’s Facebook page on Thursday and be available on Youtube, Instagram, and other social media platforms. Half of all funds raised through the release be donated to the Portland branch of the national non-profit Friends of the Children, an organization breaking the cycle of generational poverty through one-on-one youth support.

“This project arose from my desire to represent the beauty, hope, and potential embodied in our young people.” Grant says, “I have been inspired by their emotional resilience and courage in the face of the pandemic and the fight to end racism, and I see it as my role as an artist to invest in our future by looking to support future generations.”

Grant penned “Take Flight” in 2019 at the request of his son’s 8th grade teacher.

“She asked if I would write a song that we parents could sing to the children at their upcoming middle-school class promotion,” Grant explains. “I was thinking about the bittersweet nature of launching our children into the world, even as we struggle to let them go.”

Fast forward to spring 2020. The coronavirus descended on the US and traditional rites of passage for youth were suspended, followed by the nationwide protests in the wake of the murder of George Floyd.

“In this challenging and painful time of re-evaluation I especially feel for our young people,” Grant says. “I hope this song can remind us all of the beautiful potential they bring into the world. I’m also grateful to those who offer opportunities for them to fulfill that potential.”

As he did in his virtual choir video “We Rise” in April 2020, Grant reached out to his fellow musicians around the country to collaborate. Along with Willis, who contributed lead and background vocals in an ethereal vocal arrangement, Grant called on Chicago bassist Clark Sommers, LA-based guitarist Gregory Uhlmann, and Nashville drummer Jordan Perlson.

The cover art for “Take Flight” displays an image of a mural at the entrance of Portland’s A/C Marriott hotel designed and led by Portland artist Alex Chiu.

“This mural was another example of community members coming together,” Grant says. “As with so much of the art that has bloomed in our boarded up downtown, it stands in stark contrast to the narratives we see each day on the news.”

Filmmaker Adolfo Cantú-Villarreal combined footage of the mural creation with community-submitted photos to create the film for “Take Flight.”