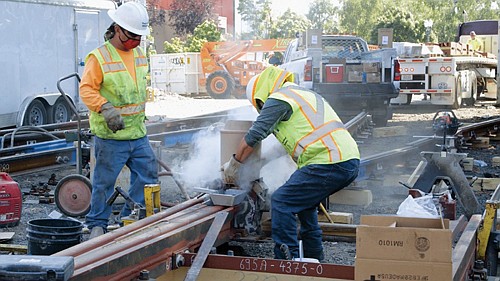 A month of construction work began Sunday on replacing the light rail tracks across the Steel Bridge between downtown Portland and the Rose Quarter. Photo courtesy TriMet

TriMet has embarked on its largest MAX improvement project to date, a month long closure of the Steel Bridge to allow crews to make a series of major upgrades to the MAX light rail system that will improve resiliency, keep trains on time and create a smoother ride.

On Sunday, the upper deck of the bridge was closed to auto, bus, light rail trains, and bicycle and pedestrian traffic to accommodate the work. All MAX lines—Blue, Green, Orange, Red and Yellow—will be disrupted for the next four weeks while the construction is completed.

To move people around the disruption, TriMet said shuttle buses will depart about every two to five minutes, serving the Rose Quarter, Union Station/Northwest Fifth Avenue and Glisan and Old Town/Chinatown stations.

Bus lines 4, 8, 35, 44, and 77, as well as all auto traffic, will be detoured to other bridges. Pedestrian and bicyclists will be able to cross the Steel Bridge on the lower-deck pathway, which will remain open during the entire project.

TriMet says the improvement project will have a positive effect for MAX riders system-wide, improving reliability and keeping trains on time. Track and switch improvements were made earlier in the Rose Quarter area in preparation for this work. This project will build upon those upgrades, resulting in fewer issues that slow or disrupt access across the bridge, officials said.

TriMet said the project will also add a much-needed boost to the economy, supporting 450 jobs at an important time for our community. It will increase system reliability and revitalize light rail across a historic 108-year-old Steel bridge, the nucleus of the MAX system with more than 620 trains crossing it every day.

Crews will work on the bridge 24 hours a day during the four-week closure. Project work includes installing improved lift joints and locks, new switches and signal equipment, as well as technological improvements. Nearly 9,000 linear feet of rail and expansion rail also will be replaced.

“We ask for riders’ understanding as this will be a complex project, one of our most ambitious to date, and can’t be done in the few hours MAX doesn’t run,” TriMet officials said.