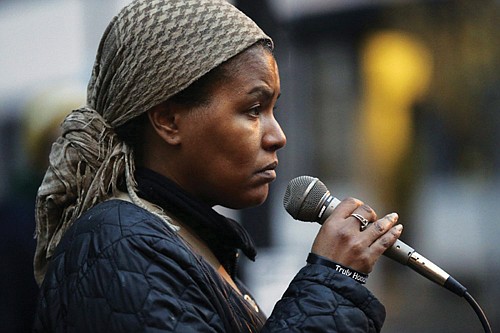 Teressa Raiford, executive director of Don't Shoot Portland, speaks in front of a crowd gathered on July 17 in front of the Mark O. Hatfield Federal Courthouse, downtown, an event that had several religious leaders calling for non-violent protests and greater accountability from local and federal officials. Other speakers called for an end to racial injustice. (AP photo)

Because of that history, some Black people have felt a cognitive dissonance when they see the crowds of white supporters, many of them arriving from homes in neighborhoods that were once Black havens.

“We live in a state that was designed to be a white utopia, and it is truly something remarkable for Portland currently to be at the center of the nation’s attention for Black Lives Matter,” said Cameron Whitten, founder of the Black Resilience Fund, which has raised $1.5 million this summer to invest in the Black community. “I could disagree with how they’re doing it, but in the end, they’re putting their bodies on the line to protect me — and that is huge compared to what we’re used to.”

While many Black residents have embraced that enthusiasm, the white crowds make retaining ownership of the movement critical. That’s led to disagreements in the Black community about what it means to be a white ally.

Some, including the former leader of the Black United Front and the head of the local NAACP chapter, have criticized white protesters who vandalize police precincts amid their call to defund police. Some Black leaders also held a news conference with Mayor Ted Wheeler — the wealthy white scion of a timber family — to say violence is distracting from the Black Lives Matter message.

Those appeals from “gatekeepers” in the Black community have angered some Black activists, who say that level of protest is necessary to keep the pressure on elected officials and pales in comparison to the violence white people have done to Black people.

“Why would I give a (expletive) about property when we’re talking about people that are losing their lives?” said Teressa Raiford, who experienced racism growing up in Portland and founded Don’t Shoot PDX, an organization pushing to defund police.

“That is outrageous, and it’s happening in 2020. That’s incredible that that would happen, and the world would view that and talk about the damage on the sidewalk or on a building,” she said.

Raiford was among those who grew alarmed when the telegenic Wall of Moms, a group of middle-aged, mostly white women, rocketed to national attention as they marched arm in arm at the nightly protests. Media flocked to their story, but the group imploded within days over accusations that their white founder wanted to monetize the group and weaponize it against President Donald Trump.

A smaller number of the self-described moms still protest, joining Black mothers under the group Moms United for Black Lives. They are led each night by Demetria Hester, a Black activist who was attacked three years ago by a white supremacist on TriMet, which some believe set the stage for the city’s current racial reckoning.

Hester, who was arrested last week while protesting, said the white moms have impressed her with their commitment to “getting woke” — educating themselves about Portland’s racist history and the extent of their privilege as white Americans.

“They’re working hard to educate themselves and educate other people and help the Black community. Our moms are wonderful for even acknowledging the fact that they have white privilege and the system needs to change,” she said after prosecutors dismissed her charges.