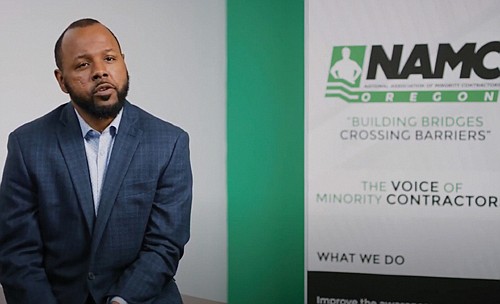 Nate McCoy, executive director of the Oregon chapter of the National Association of Minority Contractors, gives an update on the successful diverse workforce used at all levels of construction for the renovation of the Oregon Convention Center.

Minority contractors say an equity lens that Metro used to hire a diverse workforce in the recently completed Oregon Convention Center was successful.

Over half of the construction dollars spent on the project went to minority and women owned businesses; and of the hours worked on the project, 40 percent were completed by people of color, according to the recent equity report presented to the Metro Council by minority contractors.

Nate McCoy, executive director of the Oregon chapter of the National Association of Minority Contractors, said Metro’s commitment to equity within the procurement process led to a fair and competitive response resulting in the largest public improvement contract awarded to a prime contractor who is either Black, Indigenous or a person of color.

According to the report, of the total dollars paid to subcontractors on the renovation, 54 percent were awarded to majority Black-owned businesses.

With a timeline of 13 months, the Oregon Convention Center remodel was completed on time, on budget, and set records for delivering on an equitable workforce and an average contract amount of $2.6 million going to certified minority business firms. These outcomes translated to an extremely diverse workforce at all levels of construction, McCoy said.

“A diverse workforce is not only possible, but will exceed all expectations when leadership is serious about utilizing and valuing equity, diversity, and inclusion,” McCoy said.

The National Association of Minority Contractors- Oregon is a nonprofit trade organization headquartered in Portland and dedicated to serving Contractors by supporting the prosperity, sustainability, and growth of minority-owned businesses for public and private construction projects.