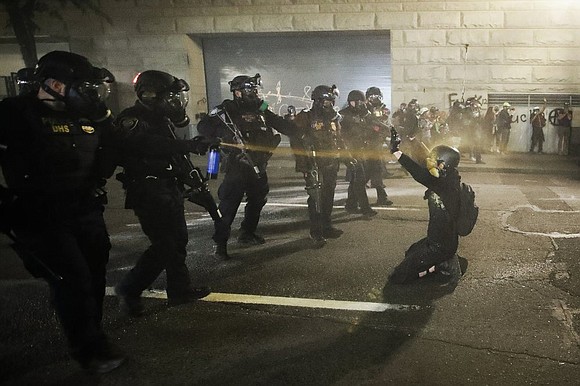 A demonstrator is pepper sprayed shortly before being arrested during a Black Lives Matter protest at the Mark O. Hatfield U. S. Courthouse, downtown, on July 30. The American Civil Liberties Union filed a federal lawsuit Wednesday, Aug. 26, challenging the legality of the actions taken by U.S. agents sent by President Donald Trump to subdue protests in Portland. (AP photo)

The lawsuit also alleges that the acting director of the U.S. Department of Homeland Security, Chad Wolf, did not have the authority to send more than 100 agents to Portland because he was improperly appointed. The federal agents exceeded the limits of their authority, making illegal arrests and using tear gas, rubber bullets, pepper spray and other tactics to squelch the protests, the lawsuit alleges.

“Our clients are individuals and organizations that gathered peacefully in downtown Portland to support Black Lives Matter after the killing of George Floyd and so many others at the hands of the police,” said Jeremy Sacks, an attorney working with the ACLU. “But they were met by violence from the federal police forces intent on squelching the protesters message and their Constitutional rights — all in aid of the president’s political agenda.”

DHS did not immediately reply to a request for comment Wednesday. The lawsuit names that agency, as well as Wolf and Trump.

Plaintiffs include three military veterans, a college professor, several Black Lives Matter activists and a man who alleges he was snatched off a street blocks from the federal courthouse by unidentified agents for no reason.

Almost all the plaintiffs allege physical injuries from getting hit by metal tear gas canisters, rubber bullets, pepper spray and other chemical irritants. Some were treated at hospitals, where they got multiple stitches and received CAT scans to check for more serious internal injuries, the lawsuit says.

A video of plaintiff and Navy veteran Christopher David’s encounter with U.S. agents outside the Portland courthouse circulated widely on social media. It showed one agent hitting David with a baton and another dousing him in the face with pepper spray. David suffered two broken bones in his hand.

The U.S. Department of Justice has said it is conducting an internal review of the incident.

Also among the plaintiffs are two groups that have organized protesters: the Black Millennial Movement and Rose City Justice.

“Federal officers had no place and no right to further exacerbate our environment in our community with force and violence and brutality and there is real attention that needs to be focused on the brutality from law enforcement,” said Shanice Clarke, of the Black Millennial Movement.

Wednesday’s lawsuit is the third filed by ACLU in Portland since nightly protests began after the May 25 death of George Floyd, the Black man who died after a white Minneapolis police officer pinned him by the neck.

Two previous lawsuits targeted the federal agents’ actions against members of the press and legal observers and against street medics who treat protesters hurt by tear gas, pepper spray and rubber bullets.

Local police have arrested hundreds of people over the three months and federal agents arrested at least 94 people at the height of the demonstrations in July.