Relics of Past Coming Down 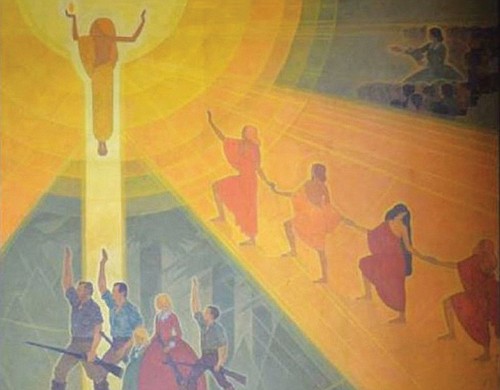 90-year-old murals depicting Native Americans and white settlers will be removed from Grant High School’s auditorium after the school district determined they were problematic for not rising to standards for promoting racial equality and social justice.

Historic mural art from Grant High School’s auditorium that many students saw as relics of a racist culture narrative are coming down.

The Portland School Board has approved Superintendent Guadalupe Guerrero’s recommendation to remove the two larger than life works depicting Native Americans and white settlers on each side of the school’s auditorium stage.

The decision at the Nov. 17 school board meeting came more than a year after the student-led Indigenous Peoples Student Union made a request to remove the 90-year-old murals. Both students and community members have called the murals hurtful to Native Americans and other students for portraying stereotypes deemed historically inaccurate.

The district determined they were problematic for not rising to Portland Public Schools standards for promoting racial equality and social justice.

Guerrero said the district would work with students and others to design new artwork for the space which underwent a major renovation during Grant High School’s remodel. The controversial murals most recently had been covered up by screens and can be taken down in sections, school officials said.

The Grant Alumni Association had been raising money to restore the murals and some felt they were not racist. The district says it is open to requests received by other arts organizations to relocate the murals for display outside of a school environment.