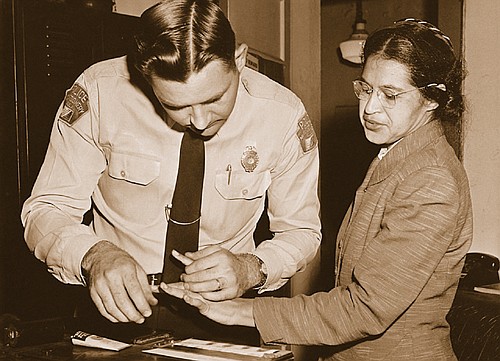 Rosa Parks, as she was fingerprinted by police during the Montgomery Bus Boycott, 1956.

To commemorate the life and legacy of the late civil rights pioneer Rosa Parks, TriMet has named her birthday, Feb. 4, as a day of remembrance. Next year, TriMet plans a fare-free day on that date.

“There’s no better way to have equity than for everyone in the community to be able to ride on TriMet that day,” said TriMet Board Director Keith Edwards, a member of Portland’s African American community who not only brought the resolution remembering Parks before the board but also suggested adding a fare holiday to honor her legacy, TriMet officials said.

“I know that there are budget constraints,” Edward acknowledged, “but at the same time, there’s an opportunity to make sure that the budget will be able to make this happen next year.”

The activist nonprofit OPAL Environmental Justice organization also declared Feb. 4 as Transit Equity Day in honor of Parks, joining representatives of the NAACP, the Urban League of Portland and Bus Riders Unite, in support of the designation and the “fare-free transit holiday” on TriMet starting in 2021.