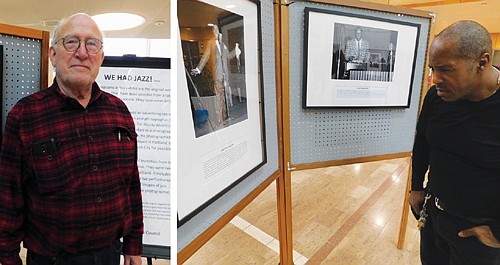 Photos from the estate of photographer Carl Henninger, discovered by his son Michael Henninger, left, form basis of the "We Had Jazz" exhibit currently on display in the public atrium at Legacy Emmanuel Hospital in inner north Portland all this month. Gerald Patrick, right, checks out the exhibit that shows a vibrant black community and nightclub scene before it was replaced by urban renewal. Photo by Michael Leighton

The golden age of Portland jazz, black culture and entrepreneurship came to an end with Urban Renewal and the construction of the I-5 freeway. The heart of Williams Avenue’s black-owned nightlife, judged blighted by city leaders and developers was taken through eminent domain, leveled and entirely replaced by the I-5 freeway and Veterans Memorial Coliseum. By 1958, little remained of this rich cultural heritage.

For Black History Month, “We Had Jazz,” a photo exhibit showcasing the leading black jazz musicians of the 1940s and 50s performing in historic Portland venues is making an encore presentation, free and open to the public, on display all month long in the atrium at Legacy Emanuel Hospital in north Portland.

The photo collection is from the estate of Carl Henniger, a Portland photographer who left a collection of 385 images believed to be the most complete photo record of Portland’s jazz history known. More photos from the collection are also on display during February at the Newmark Theater, downtown, as part of the 2020 PDX Jazz Festival.

The historic collection was rediscovered by Carl’s son Michael after resting for 60 years in a drawer in the garage of his late father’s home. He scanned and printed the original negatives and several were included in a history of the era in the 2005 book “Jazz Town” by Robert Dietsche and for promoting the 2016 Oregon Public Broadcasting documentary “Jazz Town.”

Henniger created “We Had Jazz,” with 30 of the best photographs from his father’s collection and first shared them in a special showing last fall at Portland City Hall supported by a grant from the Regional Arts and Cultural Council.

Jazz in Portland dates back to the 1920s and early 30s prohibition era when black railroad workers would bring alcohol to the city via distant locations and it would be consumed at Albina area night spots. Live music and dancing was an integral part of the club and bar scene of the day.

Tenor saxophonist Charlie Ventura (from left) plays at Janzen Beach in north Portland around 1953-54; Duke Ellington, the greatest jazz composer and bandleader of his time, performs at McElvoy’s on Southwest Fourth and Taylor around 1953; and Louis Armstrong at Portland’s old Civic Theater for a “Jazz at the Philharmonic” national touring show around the same period. The photos are from the estate of Carl Henniger.

But jazz blossomed in the years around World War II due to the influx of thousands of new black families. Income from jobs in the Kaiser Shipyards stimulated the growth and expansion of black-owned and operated night spots. Along Williams Avenue, locals could hear jazz 24 hours a day.

As jazz grew in popularity major national tour promoters like Norman Granz and Gene Norman brought leading jazz artists to the Rose City. Still segregated at the end of the war, lodging was mostly only available to black musicians in the Albina neighborhood. After their performances downtown, black artists went across the Willamette River to black area clubs to jam after hours, exchange musical ideas and to stay in available lodging.

The city’s golden age of jazz peaked between 1948 and 1956. During those years major national and West Coast jazz bands always stopped in Portland. Portland became known among jazz musicians all over the country. Louis Armstrong, Ella Fitzgerald, Charlie Parker Jr., Count Basie, Dizzy Gillespie, Lionel Hampton and many others all appeared live in the Rose City. Duke Ellington liked playing in Portland so much he played here on his birthday twice. Portland became a leading stop on the West Coast for the best in live jazz performances from big swing bands to be-bop combos.

It was during this period that Carl Henniger photographed many of the leading jazz musicians and sidemen alike. He took candid shots back stage and performance shots during the concerts. Some of these images are rare and unique and all are of the highest artistic quality.

The late Henniger was a teenager when he arrived in Portland from Milwaukee, Wisc. He attended Lincoln High, then Oregon State College where he took advance photography classes. He met his wife Jean and became the principal feature photographer for the 1942 Beaver yearbook. He served in the Army Air Corps and after the war returned to Portland with his wife and one year old twin boys. He had a career in advertising sales at the Oregonian in addition to his photography work.

Thanks to Michael Henniger for providing the information and historical context for this story.