Moving ahead on effort to save cultural landmarks 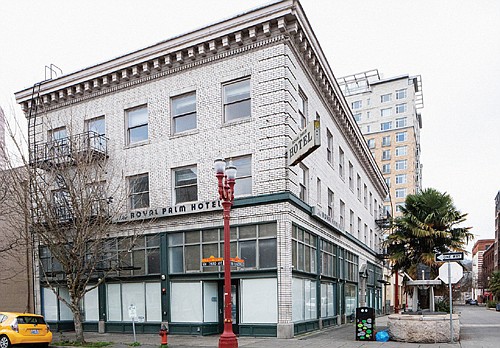 The historic Royal Palm Hotel, located at 310 N.W. Flanders, was one of Portland’s first facilities to hire African-American employees and accept African-American guests. Advocates for preserving Portland’s black history have added the structure to a list of buildings the Architectural Heritage Museum is compiling to protect from demolition. Photo courtesy Architectural Heritage Center/Bosco-Milligan Foundation

Buildings and sites that are important to the history of African Americans in Portland may soon have more protection from demolition thanks to the efforts of Portland’s Architectural Heritage Center/Bosco-Milligan Foundation and the city’s Bureau of Planning and Sustainability.

The nonprofit Heritage Center conducted a comprehensive and cultural study of the African American community in Portland from 1865 to 1973 to identify buildings that were part of the community, including houses, churches, fraternal lodges and more. The plan is to protect these buildings from demolition. It completes the study started in 2017 by Cathy Galbraith, the founding director of the foundation, who died in late 2018.

When the Oregon Advisory Committee on Historic Preservation meets later this month, it will consider adopting the foundation’s work and consider approving an application to place the historic Billy Webb Elks Lodge, an epicenter of African-American life, on the National Register of Historic Places.

The Bill Webb Elks Lodge on North Williams Avenue in the historic Albina Neighborhood has served as a gathering place for African-American social, political, educational and civil rights groups since 1926, according to the foundation.

The lodge was named for Billy Webb, a prominent musician who led an African American band that played in Portland and on steamships in the 1920s. By the end of the 20th century, the building was in disrepair, but was renovated in 2009 with the help of the National Association of Minority Contractors of Oregon.

Designed by the Portland architecture firm DeYoung and Roald, the structure was completed in 1926 for the Portland YWCA to serve the black community during those segregated times. Facilities included a gym, auditorium, stage, lounge and locker rooms for both boys and girls, according to the foundation, and activities for both sexes were programmed in coordination with black church congregations in the neighborhood.

During World War II, the USO (United Service Organizations) used to building to entertain troops, and after the 1948 Vanport Flood, the building became a Red Cross emergency shelter and clearinghouse for families separated by the flood.

After the passage of the Oregon Public Accommodations Law in 1953, which outlawed discrimination in public venues, the YWCA sold the Williams Avenue building to the Billy Webb Elks Lodge.

The State Advisory Committee will allow oral testimony on the draft proposal and the nomination of the Billy Elks Lodge at its meeting at 9:45 a.m. on Feb. 28 at Nordic Northwest’s Nordia House, 8800 S.W. Oleson Road. Oral testimony is limited to two minutes. Written comments can be sent to Tracy Collis at 725 Summer St., NE, Suite C, Salem OR 97301 or emailed to tracy.collis@oregon.gov.