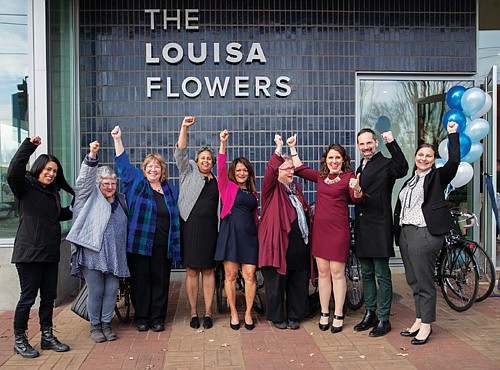 When Louisa Flowers first set foot in Portland in 1882, she and her brand new husband Allen joined the city’s small African American community of less than 500 people, despite laws that discouraged them from being there at all.

Life was not easy back then when anti-black sentiments led to discriminatory practices in housing, employment and voting rights. According to the Oregon Black Pioneers, “The direct effects of these laws lasted generations, and the harmful impacts continue today.”

Despite these challenges, as her 1928 obituary reads, Louisa “presided as a queen with quiet dignity” to build a successful life for her family and community.

In recognition of Flowers’ contributions to the city, and a new emphasis on recognizing other people of color and other under-represented communities in Portland, the housing agency Home Forward has named one of its newest properties in Flowers name as part of a new policy to support systemic change for racial and social justice.

Louisa Flowers was born in Boston, while her husband, Allen was born in Columbus, Ohio, arriving in Portland in 1865 as a cabin boy on the Brother Jonathan. He promptly jumped ship and worked at odd jobs for several years, and after he and Louisa were married, he was hired as porter-in-charge between Portland and Seattle for the Northern Pacific Railroad.

In spite of the difficulties of those early days, while her husband was working for the railroad, in addition to raising four boys, Louisa was heavily involved in civic work. She was a founding member of the Williams YMCA (today the Billy Webb Elks Lodge), was deeply involved with the NAACP and was a deaconess of the Bethel African Methodist Episcopal Church.

Early Portland pioneer and civic leader Louisa Flowers is surrounded by her family. Seated are her husband Allen (left) and son Lloyd. Standing are her sons (from left) Ervin, Elmer and Ralph.

Louisa was also a member of the Old Rose Club, which raised college scholarship money for young women, and Allen, who was appointed to the Negro Farmers Congress by Gov. Oswald West, was instrumental in bringing Booker T. Washington to speak in Portland.

The Flowers had a farm near Mt. Scott in the Lents neighborhood where they raised horses and grew raspberries, and which became a gathering place for black community life in Portland.

The family also bought land and built several houses in the old Lower Albina Neighborhood, a few blocks from the now Lloyd District neighborhood and site of the new building named in her honor. Completed in November at Northeast Grand Avenue between Hassalo and Holladay streets, the Lousia Flowers provides 240 affordable rental studio and one- and two-bedroom apartments.

Michael Buonocore, executive director of Home Forward, said naming the building for Flowers was a thoughtful process involving much research and the help of Oregon Black Pioneers and the Portland YWCA, and one that will be repeated in the future.

The idea was to identify names of people who are meaningful in Portland’s history but whose stories were lost or not well known, Buonocore told the Portland Observer.

“It’s a wonderful process to go through and made all of us feel good about sharing the story on Louisa Flowers and to have the opportunity to do more in the future,” he said. “These are often stories that are not told and their names are not on our street signs and buildings.”