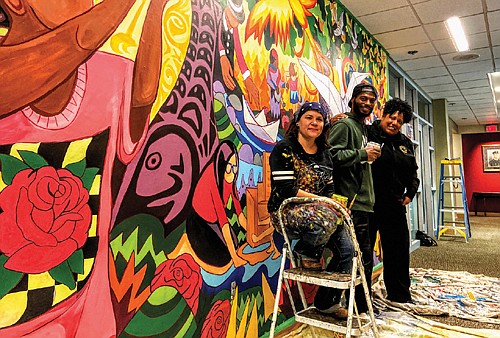 Artists Addie Boswell (left) and Antwoine Thomas join Portland Fire Chief Sara Boone Friday for the dedication of a mural they created showcasing the fire bureau’s connections to the community. The artwork is on display at the Portland Fire & Rescue’s main administration building on Southwest Ash and Naito Parkway.

When Chief Boone was sworn in last summer, she communicated that the three areas she considers the most important pillars of Portland Fire and Rescue were community, service and sacrifice.

In her first weeks of the job, she highlighted the sacrifice of past members of the fire bureau by installing new lighting and painting an accent wall behind the historical portrait of Chief David Campbell who died in a 1911 fire while protecting fellow firefighters.

The new mural sends a message for community and service by showcasing the diverse populations the fire bureau serves.

Boone said she wants everyone who walks down the hallway to the chief’s office to know they are welcome and included.

The bureau engaged the Regional Arts and Culture Council to manage the mural project and Boswell and Thomas’s submission “It takes everyone to create community” was selected and commissioned through a public process.

The colorful painting, now titled “Vibrant Cities Don’t Burn,” creates a bright tapestry of Portland imagery stitched together with symbolic threads denoting the fire bureau’s history and work. A flutter of 36 butterflies representing each of the 36 Portland Fire & Rescue firefighters lost in the line of duty fly in the direction of Chief Campbell’s portrait down the hall.

Among the scenes of nature and people working in harmony are roses, which are both a symbol of the city and the centerpiece of PF&R’s logo. The work also honors the sacredness of the land and people who came before us and is imbued with so many surprise bits of symbolism that a key will accompany it on the wall.

“I want to thank the artists for creating this celebratory, inclusive and engaging piece of work,” Chief Boon said. “I appreciate the level of commitment and understanding that the artists put into this work as visual and visceral representations of service and community.”

“Those who head down this hallway will understand our history and know that we are going into the future together. This artwork highlights the best of our city and Portland Fire & Rescue,” she added.