Shining a light on inhumanity of judicial executions 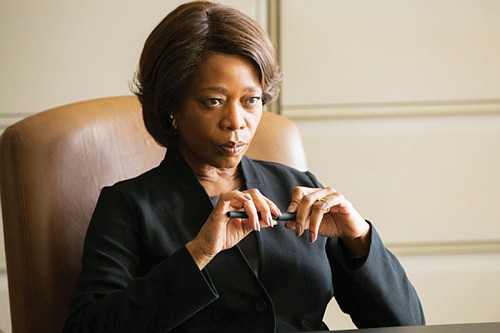 In the new film “Clemency,” Alfre Woodard stars as a dedicated prison warden who oversees death row inmates in a facility housing mostly African-American men, but whose faith in the justice system is increasingly strained. Photo by Paul Sarkis/Neon Films

A dedicated prison warden who oversees mostly African-American men on death row has her faith in the justice system increasingly strained in “Clemency,” a new film now showing in theaters nationwide that gives a behind-the-scenes look at the inhumanity that follows death penalty convictions.

The film stars Alfie Woodard as the black prison superintendent Bernadine Williams whose duties are to carry out death row executions.

Sensitive, prepared and orderly—almost to a fault, her routine is her rock: Rehearse the staff. Arrange last meal. Be cordial to lawyers and families. Oversee lethal injections. Repeat.

Never an emotion on her face, she dispenses compassion with detached feelings. Like an overworked funeral director on a busy day. Outwardly, she looks unflappable and has had few failures. Then there’s that inevitable catastrophe. One that weighs on her psyche, keeps her distant from her husband (Wendell Pierce) and aggravates a drinking problem.

Writer/director Chinonye Chukwu has done her homework. Her drama is not about the alpha males in incarceration that lord over inmates. Or the brawls on the prison recreation yard. Or redemption. It’s about the toll legally killing people levies, on all involved.

The supporting cast is exceptional: Aldis Hodge as the cop-killer next in line for death; Richard Schiff the convict’s hopeful lawyer; Danielle Brooks a person from the prisoner’s past; and Wendell Pierce the husband who watches his wife’s essence fade way bit by bit.

By the end of the movie, you’re not sure if Williams is a saint in trouble or an abettor whose time has come. Her dilemma will make you ponder the ethics of judicial executions. Getting you to that point is why Chinonye Chukwu is equal parts filmmaker, educator, intellectual and sage.

Dwight Brown is a film critic for the National Newspaper Publishers Association, representing media from the Black Press.