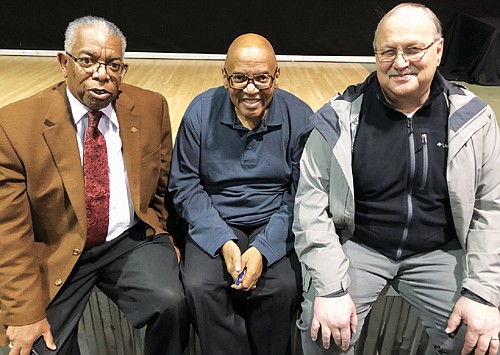 For the 35th year, Portland’s World Arts Foundation, Inc. will host a celebration and observance honoring the birthday of America’s foremost civil rights leader, titled “’Til Victory is Won: A Tribute to the Life of Rev. Dr. Martin Luther King Jr.”

The event will be held on the MLK National Holiday, Monday, Jan. 20, from 11 a.m. to 6:30 p.m. at the Highland Center, 7600 N.E. Glisan St. and will include speakers, arts, awards and “musical tributes to local artists whose contributions have put Portland on the map and will last a lifetime.”

The day’s events will all focus on Dr. King and will showcase a variety of expressions in song, oration, dance and drumming. It will be live video streamed on YouTube and Facebook and aired through Open Signal cable access, KBOO-FM radio (90.7 FM), worldartsfoundation.org on the Internet and also on XRAY.FM (107.1/91.1 FM).

Michael “Chappie” Grice, president of the World Arts Foundation, said one of the most important features of the event will recognize the contributions of individuals and organizations for exemplary community service, a tenet of Dr. King’s principles.

“Our organization’s motto is, ‘Working Hard at the Intersection of Arts and Education,’ and this gives us an opportunity to live up to, in living color, our motto, our work,” Grice said of the event.

“At the center of the production are the Lifetime Achievement Awards,” he said. “They identify many unsung heroes in addition to celebrating people who are known and those whose achievements not so well known, as well as reminding us of Martin Luther King Jr.’s dream, and that is to have equality and justice and progress and to do it with character and courage.”

The event is also an acknowledgement of local artists, a celebration of children and the opportunity “to extend the legacy of Martin Luther King Jr. by recognizing the struggle that is before us and the courage that it requires or is called upon in each of us to bring justice to our community as best we can,” Grice said. “It is our opportunity to acknowledge both the work and the dream of Dr. King, which we put on the stage.”

Ken Berry is the long-time executive producer of Portland’s annual MLK observance, and deserves credit for its longevity, Grice said.

“His vision is no different from the vision of other organizations that try to do the same thing, to celebrate our community, but 35 years is a mighty long time to do it consecutively,” he said. “So this year’s program is a really lifetime achievement award in itself for the World Arts Foundation,” Grice said.

Another feature of the day-long celebration will be the Victory Village and Marketplace with a full range of arts, crafts, services, educational materials, food, photographs, films and “a cultural-rich network of arts and education advocates.”

“Sunshine Dixon coordinates the Village, and it’s like a big reunion,” Grice said. “You can talk in there, while in the auditorium, it’s hush-hush.”

To learn more about the Martin Luther King Jr. celebration, log onto the World Arts Foundation website at worldartsfoundation.org.