Hedwig and the Angry Inch at the Armory 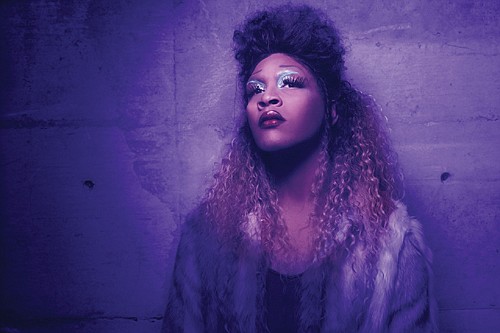 The play began in drag-punk clubs in New York City, evolving into a successful but still underground off-Broadway show in 1998. After its two-year run off-Broadway, the show become an indie film in 2001, which is where I stepped on the bus. Back then, I don't think I knew what to make of a story of a gender-queer performer singing her soul and ass off on stage in an often vengeful rendition of her life, loves, and botched sex-change operation. She was breaking free with something I respected, but couldn't really identify with. I did admire the music.

The show had a successful Broadway revival in 2014, earning eight Tony awards, including a best actor award for Neil Patrick Harris. I saw a later iteration of that production with Michael C. Hall, one of several other famous actors who inhabited the role of Hedwig. Hall's Hedwig was big, mouthy, hungry. The character struck me as offering good, famous actors a chance to show off their brilliance, their acting chops, but I can't say that it moved me.

The two Hedwigs I first saw on film and onstage were white. The character is described as an East German "slip of a girly man" and in those performances, the story reads white and defaults to white. But of course, there are black people in Germany, as anywhere else. Taye Diggs took over the role on Broadway at the end of its Broadway run in 2015, the first black man to play Hedwig. I hear he was great, but I wasn't there.

And having seen a prior version of that Broadway production, I have to believe that PCS's show starring two black performers--Delphon "DJ" Curtis Jr. as Hedwig and Ithaca Tell as her gender-bending husband Yitzak--is a different thing entirely. Directed by PCS associate producer Chip Miller (who most recently directed its world premiere of "Redwood,"), this show is built around what these black performers can bring to it, and plays on a much smaller and grungier stage than the Broadway house. Britton Mauk's brilliant set places the show in an abandoned mall, most definitely on the sidelines, and places the audience in much closer proximity to this intimate and interactive performance. Hedwig's story rings much differently here, told by these performers.

In these hands and in these bodies, the music and guts of the show come alive. Hedwig's story has always been one of fighting to be loved, fighting to be seen. Inside a black body, that story rings more deeply. The fight for identity, the creativity stolen and colonized, the struggle for love and a persona that is whole and truly one's own, the ways being a hurt person can turn one into a person who hurts--all of these aspects of Hedwig's personality and her entanglements with Tommy Gnosis (the more-famous off-stage performer and Hedwig's former lover who built his fame on Hedwig's creativity) and Yitzhak, who Hedwig holds back and abuses, resonate here in new ways. Curtis and Tell absolutely convince in every moment; both sing with voices that make you believe in their dreams of stardom and at the same time make you understand why it has eluded them. And the movement and costume design inspire an appropriately fine mixture of cringes and admiration. You feel Hedwig fighting for something that sometimes only she can see.

I left identifying with Hedwig in ways I never had done before; this production is a better and deeper container than I have yet experienced for what is heroic about a struggle to be truly oneself. It deserves an enthusiastic audience, and especially more audience members of color.