His words continue to have relevance today 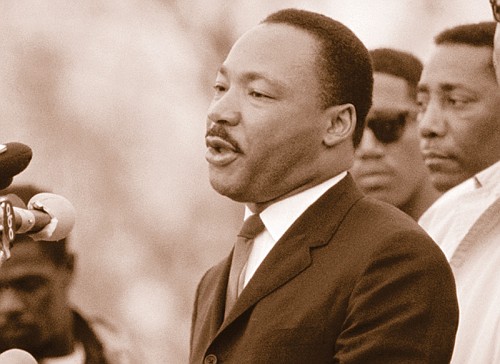 Though he wrote five books and delivered up to 450 speeches a year, Dr. Rev. Martin Luther King Jr. is often defined by his most famous speech, “I Have a Dream” delivered at the Lincoln Memorial during the 1963 March on Washington, and his “Letter from a Birmingham Jail” written in the same year.

The words of America’s foremost civil rights leader stirred great emotions across the country and the world at the time, and are still so relevant even today. An excerpt from the “I Have a Dream” speech illustrates his commanding use of language to illustrate the racial divides and the hopes for progress, ending with its most well-known passage.

“In a sense we have come to our nation's capital to cash a check. When the architects of our republic wrote the magnificent words of the Constitution and the Declaration of Independence, they were signing a promissory note to which every American was to fall heir. This note was a promise that all men, yes, black men as well as white men, would be guaranteed the unalienable rights of life, liberty, and the pursuit of happiness. “As we walk, we must make the pledge that we shall always march ahead. We cannot turn back. There are those who are asking the devotees of civil rights, "When will you be satisfied?" We can never be satisfied as long as the Negro is the victim of the unspeakable horrors of police brutality. “I have a dream that my four little children will one day live in a nation where they will not be judged by the color of their skin but by the content of their character.” 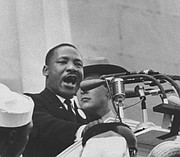 Martin Luther King Jr. delivers his most famous “I Have a Dream” speech during the March on Washington, Aug. 28, 1963.

His “Letter from a Birmingham Jail” is also relevant, especially when we consider the last year’s student-led Climate Strike demonstrations and the earlier Women’s March.

“We know through painful experience that freedom is never voluntarily given by the oppressor; it must be demanded by the oppressed. Frankly, I have yet to engage in a direct action campaign that was ‘well timed’ in the view of those who have not suffered unduly from the disease of segregation. For years now I have heard the word "Wait!" It rings in the ear of every Negro with piercing familiarity. This "wait" has almost always meant "never." We must come to see, with one of our distinguished jurists, that "justice too long delayed is justice denied."

Although some of King’s language, like the use of “Negro” are now dated, and some justice and equality issues for black Americans have changed for the better, the racial divide in America is still stark. His words still carry a clear ring of truth today, and perhaps as never before.

Other speeches King gave may have been less well-known, but just as controversial and moving, like his “Beyond Vietnam – A Time to Break Silence” speech on April 4, 1967 at Riverside Church in New York City.

Although many of his advisors begged him not to give this speech about his opposition to the war in Vietnam, and President Lyndon Johnson stopped speaking to him afterward, King’s words echo today as the current escalation of conflict with Iran unfolds in the headlines.