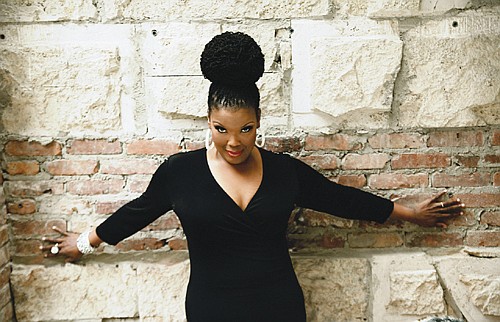 Internationally acclaimed opera star Angela Brown will be in Portland for multiple performances this month, including the annual Martin Luther King Jr. community celebration on Monday, Jan. 20 at the Highland Center, free 11 a.m. performances on Jan 21 and 22at Roosevelt and Franklin high schools, and a public reception on Thursday, Jan. 23 from 6-8 p.m. at the June Key Delta Center, 5940 N. Albina. Photo courtesy Angela Brown

Angela Brown, an internationally acclaimed opera star, will sing at the World Arts Foundation’s annual Martin Luther King Jr. community celebration on Monday, Jan. 20 at the Highland Center in northeast Portland, and at other local churches the same week, along with free concerts on Jan. 22 and 22 at Roosevelt and Franklin high schools.

Growing up, Brown said she had “a keen awareness” of Martin Luther King Jr. through her grandfather’s church, and like many black families, hers had photos of the civil rights leader at home, along with pictures of Jesus and President John F. Kenney.

In an interview with the Portland Observer, Brown said the country has made some strides in race relations, but still has a long way to go. When asked what she thinks Martin Luther King would say about race relations today, she was blunt.

“He would probably feel like things have been turned back,” she said. “We made a lot of strides, of course, in his time as far as social acceptance, going to school where you want to and eat where you want to.

“But other things are about the soul – how people treat one another, things no mortal man can fix,” she said. “That’s a God thing, and I think he would be disappointed, to say the least.”

When Angela Brown was in high school in Indianapolis, she told the magazine Psychology Today that a voice teacher told her she could “stop right there” and be the next Aretha Franklin, or she could “be the best Verdi soprano the world had ever seen” by working hard for at least a decade, mastering vocal techniques as well as foreign languages.

Brown opted for the latter and never looked back. And after her debut with the Metropolitan Opera as Verde’s Aida, she received accolades far and wide.

Brown said she’s grateful to the black women opera singers who came before her, people such as Jessye Norman, Kathleen Battle and Leontine Price.

“I’ve been blessed and had so many trailblazers, she said. “I have a better opportunity than black men, and it’s harder for them to break in, especially in leading roles where they may be kissing someone who’s not black.

“I definitely have heard stories where black male singers have been hired, but once they get to rehearsal they are let go because the director wants to ‘go in a different direction.’ It helps to grow that thick skin that you will need.”

Brown’s path to stardom was a long one and she had to go through several auditions with the Met before she was finally accepted. The answer, she said, is just to keep on trying.

“You have to keep going back. If they offer feedback, take it and take it seriously, because that is the upper echelon of our business,” she said. “Sometimes it’s not the right fit at that moment, but it’s just for that moment they say no. When your ticket comes up, you’ll be cake in the oven. Just try not to get depressed and weary.”

This is the first time that Opera in the Park, which sponsors opera performances in Washington Park during the summer, has sponsored a wintertime performer in an expansion of their mission, said Sharon Buckmaster of Opera in the Park.

“I think it’s exceptional that so many schools wanted me to come and present opera,” she said. “From a cultural point of view, it demystifies opera.”

Brown says Opera is for everyone.