Back to the Drawing Board

ODOT to consider buildable lots over I-5 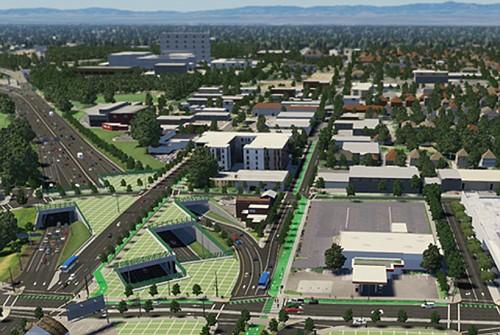 An artist’s rendering shows proposed caps over I-5 in the Rose Quarter area that could only support a park or plaza. The Oregon Department of Transportation will now consider making the caps suitable to hold buildings after complaints by advocates for the African American community who want buildable lots to restore historic displacement going back decades.

The proposed widening of I-5 in the Rose Quarter area to include new access roads and freeway caps has received a lot of press lately, as state and local governments and community leaders debate how to help heal the destruction of much of the old Albina neighborhood more than 50 years ago. The estimated cost of adding a 1.7-mile-long lane in both directions already has risen dramatically, adding about $295 million to the 2017 estimate of $500 million, but could go higher if buildable caps are added to the plans.

The caps or covers are meant to reconnect the community that was destroyed when hundreds of Albina neighborhood homes and businesses were bulldozed for the new interstate in 1962 and the construction of Veterans Memorial Coliseum. Just what form the caps will take – whether they will just be open space or suitable for building – is still on the drawing board and local advocates, such as the Albina Vision Trust, are calling for more community input.

Winta Yohannes was recently appointed as the managing director of Albina Vision Trust, which has the mission of “Honoring the neighborhood’s past by transforming what exists today into a socially and economically inclusive community of residents, businesses, artists, makers and visitors.”

Above all, Albina Vision Trust wants transparency in the planning process, Yohannes said, and Gov. Kate Brown has called for a delay in the process to explore tolls for the new roads to offset costs and to hire a consultant to evaluate the cap proposals.

"The Albina Vision team is committed to working with ODOT and other stakeholders to see the right project through to completion in a timely manner,” Yohannes said. “The Albina/Rose Quarter Improvement Project represents an opportunity to support a transformative vision -- not just for reconnecting the neighborhood -- but for how major public investments can facilitate tangible racial, economic and environmental outcomes that set us on the path to designing the communities we deserve.”

“The project requires a fresh look and a new approach,” Adams wrote in a letter to Brown in December. “It is an opportunity for significant transportation investment dollars to serve as a down-payment on a comprehensive, long-range strategy to rebuild a community that values children, affordable housing, public spaces and community wealth-building.”

In the meantime, ODOT Commission chair Bob Van Brocklin took the advice in Brown’s letter and made a formal proposal to put off a full environmental impact study until March, to hire a consultant on caps, look at tolling and create advisory committees to include community members.

The ODOT Commission will meet this Thursday in Lake Oswego to consider, among other agenda items, a presentation from ODOT experts “on the Interstate 5 Rose Quarter Improvement Project cost estimate and request approval to submit the Cost to Complete Report to the Oregon Legislature.”