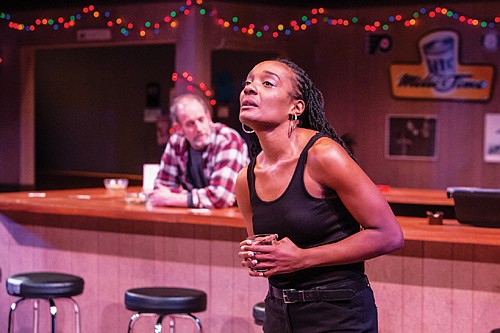 Portland folks have the opportunity to see Profile Theater's first-rate production of Lynn Nottage's Pulitzer Prize-winning play "Sweat" through Feb. 2 at Imago Theater. The play's insights could not be more timely, or more resonant.

To prepare to write the play, Lynn Nottage spent many months listening to the people of Reading, Penn., a formerly thriving industrial city which, by 2011, had been identified as one of the poorest cities in America. She was drawn there because the city, with its diverse population, is a prime example of the decline of American industry. The play first opened in 2015 at the Oregon Shakespeare Festival, a year before Trump's election--and by the time it opened on Broadway in 2017, the Trump election had happened, and it seemed like Nottage, an African American, had noticed things that everyone else had missed.

And yet it still appears that people may be missing what Nottage noticed. The narrative about Trump's election was (and, to some degree, continues to be) that "working class" people had been left behind and lashed out, seeing Trump as the answer to their economic woes. But "working class" is generally taken to mean white people; the effects of the economy on black, indigenous, and people of color does not evoke the same collective curiosity and attention, limited though that collective curiosity and attention may be.

Victor Mack (left) and La'Tevin Alexander star in ‘Sweat,’ a Pulitzer-Prize winning play that gives insight to the struggles of workers who fall into despair when they lose their jobs in the face of industrial decline.

But Nottage listened well--and this production invites us to listen well too. The play, which jumps back and forth in time between 2000 and 2008, tells the story of a group of steelworker friends who regularly gather in a bar run by Stan (Duffy Epstein), whose own career as a steelworker was cut short by a disabling accident. Tracey (Linda Hayden), Jessie (Alissa Jessup), and Cynthia (Cycerli Ash) all have been at the work long enough by 2000 that they are feeling it in their middle-aged bodies; Jason (Jim Vadala) and Chris (La'Tevin Alexander), the sons of Tracey and Cynthia respectively, are just starting out, and factory work seems the most obvious and really only option for a comfortable life.

By 2008 (when the play's opening scenes are set), it's clear that things have unraveled, and Jason and Chris have been released from prison. Most of the action takes place eight years earlier, as the characters experience the unraveling of the livelihood they had all counted on and we come to learn about a final violent conflict that changed all their lives.

As envisioned by Nottage, expertly realized by director Christopher Acebo, and beautifully played by this excellent cast, the decline of these characters feels both emblematic and very specific. All the characters have union jobs, yet the white characters, particularly Tracey and Jason, speak from a sense of entitlement that the black characters don't quite share; Tracey and Jason carry a sense of legacy, and speak of the generations that their family members toiled in this industry as though it creates a sort of compact. A good union wage and benefits is simply their due, what they are owed for decades of work and sacrifice.