Woman arrested; other suspect at large 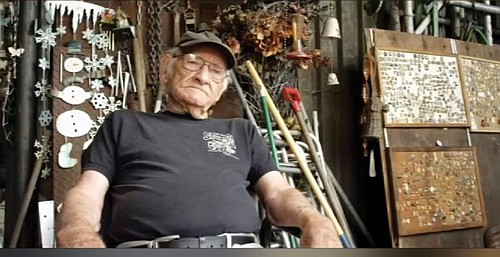 Eugene Gora, 85, a metal fabricator and neighbor who resided at his shop on Northeast Martin Luther King Jr. Boulevard was murdered in 2018.

An arrest has been made in the 2018 murder of metal fabricator Eugene Gora, 85, but an accomplice is still at large.

Underhill reported that another person, who has not been identified or arrested, “unlawfully caused the death of Mr. Gora.”

For many years, Gora ran Gora’s Welding and Fabrication at the corner of Skidmore and Martin Luther King Jr. Boulevard, where his work ranged from barbecues to elaborate artwork that added a unique flavor to surrounding north and northeast neighborhoods and businesses.

In the months leading up to his death, Gora was trying to sell his property and possessions, family members said. He was a regular at the Miracles Club and A Heavenly Taste Café next door, where his friends and neighbors are relieved that the case has at least been partially solved.

Pastor Dwight Minnieweather told KPTV that Gora was remembered for his kindness and storytelling.

“He would tell us stories and say things that we couldn’t even begin to remember because he was way older than we were and he was just a nice, sweet guy,” he said.

A friend found Gora’s body on May 10, 2018, but no one has forgotten him, Minnieweather said.

“For the detectives and all, thanks, thanks,” he said. “’A lot of pain is still in our community, ‘cause we didn’t know what happened.”