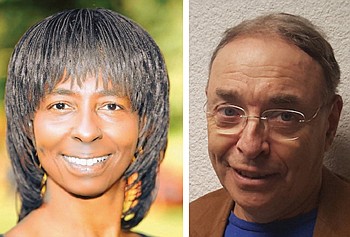 Did Trump say out loud, "I'm going to gut the original environmental law of the US and it will affect everyone's health negatively but the health of black and brown people the most?"

Of course not. But that is exactly what is afoot with his intention to roll back major portions of the 1969 germinal environmental law—the National Environmental Protection Act—the original law upon which all such important protections are built. The Clean Water Act, Clean Air Act, Endangered Species Act, Resource Conservation and Recovery Act—all these protections, and more, of our public health will be weakened and, in some cases, rendered virtually moot, when Trump finishes.

It's not like environmental laws are perfect, but they need improvement, not evisceration.

According to a report in The Hill, the EPA found black Americans are subjected to higher levels of air pollution than whites. Another study found that communities of color and low-income populations are disproportionately exposed to chemical releases. Others have found that minority and low income communities were more likely to be near hazardous waste sites. Advocates often collectively refer to these towns as environmental justice communities.

So there is already a lethal bias against poor people and people of color in many respects—as if that means that middle-class white people are immune from these public health threats. It does not.

But it does mean that institutional racism will be claiming even more victims—little children, innocent of anything other than being African American or Latinx or Native American/Pacific Islander, will be statistically more likely to suffer asthma, nascent heart damage and a wide range of chemically/toxically related cancers.

When a little girl whose parents can only afford housing near some project or facility that is releasing unhealthy atmospheric elements or polluting the local drinking water, when that child gets sick, that isn't a statistic, that is a little girl. Donald Trump should not be allowed to hurt her.

From caging children to poisoning them, this impeached guardian of corporate profits should not be permitted to get away with this and other crimes against humanity.

Racism is not primarily, or even much, about an ignorant white person calling a black person the n-word, nor about Trump calling refugees "animals." It is far more common, far more deadly, when it's baked in the cake of our laws, our governance, our education, our healthcare system, and our economy.

The hypocrisy of Trump labeling other countries, even some of those with universal healthcare and decent environmental law enforcement, as "sh--hole" while we descend to new lows ourselves, is truly abysmal. Our leadership in the world is being dragged down by one unfit to lead in any worthy sense.

The diseases associated with proximity to toxicity are insidious, atypical in many cases, and deceptively chronic, all highly associated with resultant compromised self-concept, and other mental health risks. It is often hard to pinpoint a proven origin, but common sense epidemiology shows it clearly. Of course, access to the health care required is negatively associated with the populations most directly affected, thus exacerbating all these causal and correlative factors.

Our work, if we are serious about making America great, is to repair racial disparities, not worsen them. Please sign the MoveOn petition to fight institutional racism as a threat to public health and let your federal representative know that you care, that you oppose this attack on our basic environmental laws.

Leslie Gregory is a certified physician assistant focusing on preventive cardiology and is executive director of Right to Health. Tom H. Hastings is PeaceVoice Director and on occasion an expert witness for the defense in court.