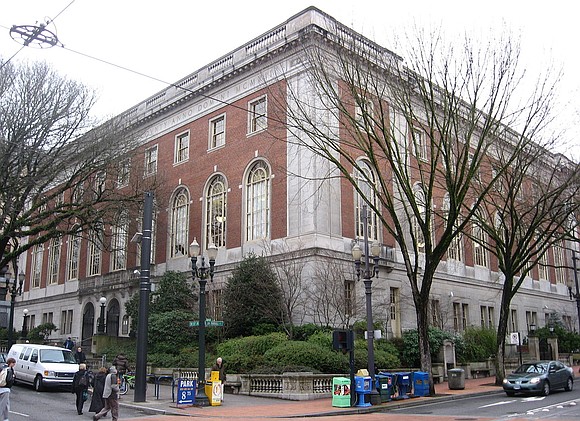 The Multnomah County Central Library, downtown, is shown in this photo from wikipedia commons. A new policy by the library system eliminates all late fines for library materials, but retains billing for unreturned items.

Multnomah County Library will permanently stop charging late fines on all library materials, clear all existing fines and restore access to accounts blocked because of fines, effective immediately, officials announced Wednesday. Patrons will continue to be billed for unreturned materials.

“Our public libraries exist to provide free and equal access to shared resources for everyone,” said Multnomah County Chair Deborah Kafoury. "And yet, the practice of assessing punitive fines for late returns has locked people out, many of whom are already facing hardships. The resources, support and sense of belonging found in our libraries are needed urgently during these trying times, and I’m grateful that this change will further open access to this community asset.”

The library will remove fine debt for 72,861 patron accounts in an amount totaling $730,185 and restore library account access for more than 2,000 people who had their accounts blocked due to fines in excess of $50.

“We have watched closely as a growing body of research has shown that late fines don’t work, that a large percentage can never be collected and that ending the practice doesn’t increase the number of late returns,” said Director of Libraries Vailey Oehlke. “Other library systems as close as Vancouver and as far away as Washington, D.C. have ended the practice, and it’s well past time we did the same. This change will help Multnomah County Library truly serve its community in a free and equal way.”

In fiscal year 2019, the library collected about $548,755 in overdue fines (about 0.5% of its adopted FY21 annual budget). Overdue fine revenue has decreased significantly over time (from nearly $1 million in 2016), as e-books and audiobooks have grown in popularity and since the library eliminated youth fines in 2016 and educator fines in 2018.

“Late fines cause some patrons to avoid using the library at all because they are unable to pay the fines and they fear having a conversation about debt. Everyone in our community benefits when people can access the materials and resources they need to learn, grow, be creative, and make their lives better for themselves and their families,” said Oehlke. “Ending fines is one way the library is taking immediate action and creating a positive change for our community.”

After building closures due to COVID-19, the library is now offering holds pickup service at every library location (except Sellwood-Moreland and Albina libraries). The library doesn’t currently have an estimated date for when it will be able to offer in-person services beyond holds pickup. Library services updates will be posted at multcolib.org/covid19.