Police and Protestors Clash on Lombard 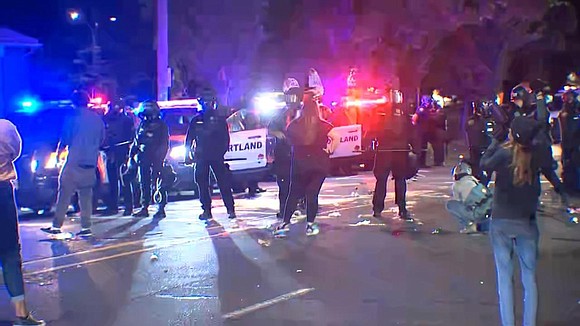 Protestors clash with police Tuesday nigth in the vicinity of a police union office on North Lombard Street and Campbell Avenue. (KPTV photo)

Riot-clad police officers confronted a couple of hundred of Black Lives Matter protestors in north and northeast Portland Tuesday night after they descended on a police union office on Lombard Street, sparking clashes between the crowd and police that stretched across several neighborhoods and lasted nearly four hours.

Police claim demonstrators blocked the street and began to throw projectiles at officers as police stood outside the Portland Police Association office in the Kenton Neighborhood. The clash came on the eve of a planned vote to extend Portland’s police union contract.

Police declared the protest an unlawful assembly and worked to disperse the crowd, but the demonstrators would not back down.

Authorities said when protestors continued to throw water bottles, rocks and cans at police, and move dumpsters and trash bins into the street and try to set them on fire, they deployed CS gas, a type of tear gas, in an attempt to disperse the crowd. Some crowd control munitions were also used, police said.

The confrontation started around 9 p.m., just minutes after the demonstrators landed at the police union office, after marching from Peninsula Park about a mile away. Over the next two hours demonstrators clashed with police on Lombard stretching over many blocks. Several arrests were made.

At around 12 a.m., about 85 remaining demonstrators marched to the North Police Precinct at Northeast Martin Luther King Jr. and Killingworth Street, police said. Authorities again admonished the crowd, informing them an unlawful assembly had been declared, but clashes continued and some protestors were accused of setting a fire in a dumpster they had pushed into the street on the side of the precinct.

Police said most demonstrators left the area by 1:15 a.m.