Honored for 50 Years of Service

Pepsi salutes worker who has passion for giving back 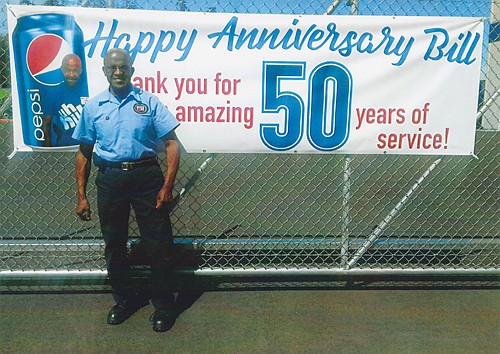 Bill Jackson, a lifetime member of Portland’s African American community, is being honored for 50 years of service with PepsiCo.

“Bill, thank you for your dedication to this company and your community. May we all gain inspiration from your incredible legacy here at PesiCo,” a company proclamation declared.

Jackson has a passion for giving back by mentoring under-privileged black children in the community as well as mentoring new hires at Pepsi for the past 40 years. He is also a leader for driving conversations on race in Portland and the workplace, making sure the topic is addressed in an appropriate manner and helping to ensure different perspectives have been considered.

Up until five years ago, Jackson held two jobs, as a nigh loader with Pepsi, and security for Portland Public Schools. Since then, he has maintained his full-time Pepsi job on dayshift as a replenisher, checker and transport unloader.

“He truly exemplifies the meaning of ‘hard work, and for the first 30 years of his career, worked full time with Pepsi at night and also worked fulltime at Fred Meyer during the day,” company officials said.

Jackson also was recently honored by having a new street named for him, inside the re-developed five block area for PesiCo’s new distribution center north of Sandy Boulevard, between Northeast 25th and 27th Avenues, which also includes new space for housing.

Before joining Pepsi in 1970, Jackson served in the U.S. Marine Corps.