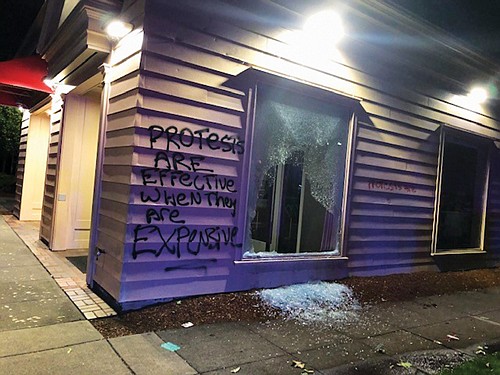 Windows were smashed at a Bank of America branch on Northeast Martin Luther King Jr. Boulevard for the second time last week after a protest march on police brutality and racial justice descended into violence and vandalism.

Advocates for Portland’s African American community joined black leaders in law enforcement this week to speak out against the violence, vandalism and arson fires that have marred many of the daily protests over unjust police shootings and racial bias in the criminal justice system.

“We have to be smart,” said Joe “Bean” Keller, a black father who lost his son to a police shooting in 1996 and has led a sustained campaign for justice for his son ever since.

Keller said the violence and vandalism that has erupted after several recent protests damages the cause of prosecuting bad cops and adopting better policing practices because it turns people who would be supporters against a growing justice movement to address bias in policing.

Even though he still seeks justice in his own son’s case, calling for the officer who shot him in the back to be charged with murder, even after 24 years, Keller isn’t against all cops.

“I’m not against police overall. We have bad cops and good cops,” he told the Portland Observer. “We need police to respond if there is a break-in to your home. We need police in so many ways.”

Keller’s 20 year-old son Deontae Keller was killed after being pulled over by Portland police while driving a car suspected of gang activity. He was shot in the back when he jumped out of the car and ran.

Keller said progress against unjust police shootings will be measured by changing the hearts of people who are resistance to changes in policing, and the violence and hate that has been erupting, in isolated cases, mostly late at night after peaceful protests, only reinforces a frame of mind that has stalled previous efforts to hold police accountable.

Newly appointed Police Chief Chuck Lovell, who is black, said when rioters barricaded the doors of the North Precinct last week and started fires outside they endangered people inside and were harming the community.

Several businesses on Northeast Martin Luther King were vandalized for at least the second time last week. It came during the predawn hours, four hours after a peaceful protest that started at Peninsula Park, moved to a police union office on Lombard Street, and descended into violent confrontations between protesters and police in riot gear.

Long time leader Ron Herndon of Portland’s African American community, said the violence committed during protests have nothing to do with helping Black people, saying it needlessly scares neighbors and their children.

The protests began in Portland and nationally after the Memorial Day police custody death of George Floyd in Minneapolis, a black man whose neck was pinned to ground and died in a struggle to breathe.

“As riots continue, it is obvious to everyone that this is no longer about George Floyd, social justice or police reform,” Turner said. “This is about a group of individuals’ intent on causing injury, chaos and destruction by rioting, looting, starting fires and throwing rocks, bottles, mortars, urine, and feces at peaceful protestors as well as the police.”

The city’s elected officials “should not allow a meaningful dialogue and protests about racial and social equity to be drowned out by the sound of rioting and violence,” Turner said.