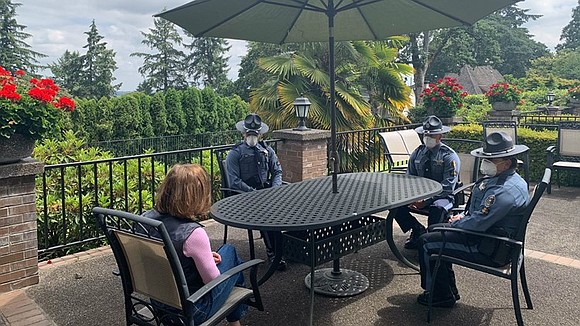 Gov. Kate Brown sat down with masked Oregon State troopers Friday who just two days earlier went into a Corvallis coffee shop without face coverings despite her statewide order to wear masks to prevent spreading the coronavirus. After Friday’s meeting, Brown said the troopers pledged to do better and she didn’t want to judge or fire anybody over one mistake. Photo courtesy Oregon Gov. Kate Brown

Gov. Kate Brown sat down with Oregon State troopers on Friday just two days after they were recorded on survelliance video going into a Corvallis coffee shop without face coverings despite her statewide order to wear masks to prevent spreading the coronavirus.

One of those troopers reportedly openly questioned the governor’s order and is on leave, but the others met with the governor at Mahonia Hall, her residence in Salem.

According to reports from The Oregonian/OregonLive, the trooper went into the Allan Bros. Coffee & Tea shop on Wednesday last week without a face covering and told an employee, “Governor Brown has no authority to take our civil liberties. We aren’t going to wear masks.”

On Thursday, both the governor and Oregon State Police Superintendent Travis Hampton called the reported exchange at the coffee shop unacceptable.

“Let me crystal clear: No one is above the law. Superintendent Hampton and I expect the Oregon State Police to lead by example,” said Brown.