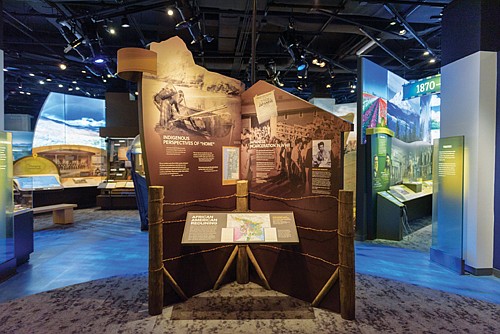 The Experience Oregon exhibit at the Oregon Historical Society, downtown, confronts many of the hardships and successes for diverse populations who have called the state their home, including American Americans, Japanese Americans and Indigenous peoples. The museum is re-opening on Saturday under new safety protocols to protect for the health of staff and visitors during the coronavirus pandemic. Photo by Andie Petkus courtesy Oregon Historical Society

After nearly four months closed, the Oregon Historical Society re-opened its downtown museum to the public on Saturday, July 11, under new health and safety protocols to protect the health of staff and visitors during the coronavirus pandemic. Admission is always free to Multnomah County residents.

When the museum closed on March 14, the Oregon Historical Society was about to debut a new original exhibition, Nevertheless, They Persisted: Women’s Voting Rights and the 19th Amendment, which chronicles the complicated history of woman suffrage for voting rights and profiles the brave activists who fought for change.

Now extended through mid-2021, visitors to the exhibit will see how Oregon was closely intertwined in the national history of woman suffrage and to the complex history of American democracy.

“Nevertheless, They Persisted will prompt visitors to reflect on voting rights and the many ways that activists have fought to universalize this basic right of citizenship,” said Kerry Tymchuk, the museum’s executive director. “We were excited to open this exhibition in March, and four months later, the important messages of the power of activism shared in Nevertheless, They Persisted feel even more relevant today.”

Oregon women gained the right to vote in 1912, the initiative passing with a 52% majority after five prior failed attempts spanning nearly 30 years. It was not until the ratification of the 19th Amendment in 1920, however, that women across the country gained the right to vote in local and national elections. Even then, these rights did not extend to all women — restrictions on citizenship continued for Native Americans and first-generation Asian Americans well into the 20th century, and frequently used voter-suppression methods.

Nevertheless, They Persisted, and the Oregon Historical Society’s recently renovated permanent exhibition, Experience Oregon, give visitors an honest, and often difficult, look at our state’s history.

In a recent statement on racial justice and equality, Tymchuk and OHS Board President Mary Faulkner wrote, “The Oregon Historical Society recommits itself to being a valuable resource by documenting, preserving, and sharing our state’s history, from all perspectives, and in all its complexities. We hope that everyone will continue to help guide us in providing knowledge of the past and working to build a more just and equitable society in the future.”

Museum visitors will be asked to adhere to health guidelines by wearing a face covering and maintaining a safe six foot distance between people and groups. For safety, hand-on interactive features in open exhibits are closed until further notice.