Alberta Simmons was devoted to helping people in need 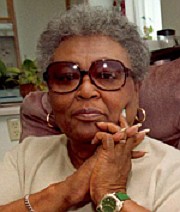 Funeral services are scheduled July 17 for Alberta Mae Simmons, a longtime member of Portland’s African American community who was known for helping people in need, including the creation of a nonprofit to build housing for seniors.

She was born on March 15, 1933 in Houston, Texas where she lived until her teenage years when she moved to Berkeley, Calif. and graduated from Berkeley High School. She met and married Solomon F. Simmons and to this union of 28 years, four children were born.

As a devoted wife, mother, grandmother, sister and friend, she was always there to support anyone in need.

Alberta wore many hats throughout the years, whether it was volunteering to be a PTA president, Girl Scout leader or working in public schools in Oakland Calif. and King Elementary in northeast Portland. A member of “The Magnificent Seven” and so many other organizations, she was a community activist who spoke her mind, a woman of strength who was always about helping others. She was a true role model who made a difference by not just talking about issues, but doing something about them.

A senior housing complex in northeast Portland is named the Alberta Simmons Plaza in honor of Alberta Simmons, a longtime leader from Portland’s African American community who co-founded Housing Our Families, a nonprofit community organization.

One of the last activist hats she wore was as co-founder of Housing Our Families, an important nonprofit organization in the community where she will never be forgotten for enhancing the lives of others. While she accomplished unthinkable good, it was through the grace of God, her determination, and the will to succeed that the “Alberta Simmons” building will continue to house seniors in the community for years to come, honoring her vision for the elderly.