Another Riot Declared at Police Protest 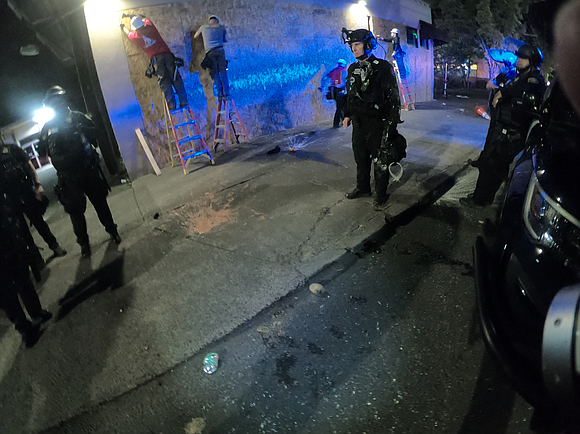 Portland Police stand guard outside the Portland Police Association building at North Brandon Avenue and Lombard Street, the scene of a declared riot on Tuesday night. The photo shows projectiles that police said were thrown at them littering the sidewalk and construction crews working to board up windows of the building. (Portland Police Bureau photo)

For the second time in two weeks, a protest Monday night outside a police union office on North Lombard Street escalated out of control with a riot declared by Portland police.

Police said a group of about 200 demonstrators gathered at nearby Kenton Park and marched to the 1800 block of North Lombard where tensions escalated as the street was blocked where the Portland Police Association building is located.

Multiple warnings were provided via a sound truck that the group needed to get out of the street or face arrest, police said.

Officers said they were making an arrest when several members of the group interfered and pulled people being detained away. Protestors were also accused of shining bright lights in strobe mode and pointed lasers in the officer's eyes.

While a construction company was boarding the windows of the police union office, some in the crowd threw objects and one of them struck a worker, police said. Several announcements were made on a sound truck warning the crowd that engaging in criminal activity would subject them to arrest and a greater use of force, including munitions.

In response, police said rocks, bottles, broken pieces of brick, ball bearings, paint filled objects, and other items were thrown at officers. At one point, a mattress was scorched as someone attempted to light it on fire. A subject climbed onto the roof and jumped off, authorities said.

Due to the life safety risk presented by many members of the crowd, a riot was declared and dispersal orders were given, police said. The area of North Denver Avenue to I-5 and North Bryant to Farragut Avenues were closed and the crowd was provided warnings and opportunities to disperse and leave. Many chose to remain and some selective arrests were made.

Officers said they remained in the area until the board up was completed at about 2:45 a.m., but returned to disperse a protest group that came back to the PPA office and fired pyrotechnics at the building and stacked a mattress against the wall.

One officer sustained a minor injury to the hand from a thrown brick.