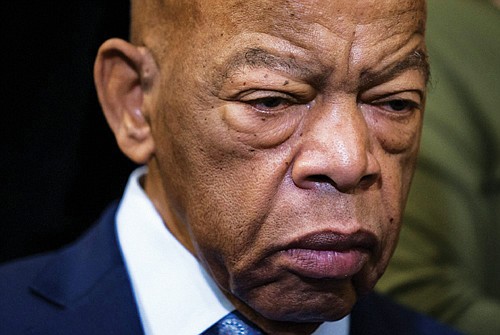 (AP) — John Lewis, a lion of the civil rights movement whose bloody beating by Alabama state troopers in 1965 helped galvanize opposition to racial segregation, and who went on to a long and celebrated career in Congress, died Friday. He was 80.

House Speaker Nancy Pelosi called him “one of the greatest heroes of American history.”

Senate Majority Leader Mitch McConnell said Lewis was “a pioneering civil rights leader who put his life on the line to fight racism, promote equal rights, and bring our nation into greater alignment with its founding principles.”

Lewis announced in late December that he had been diagnosed with advanced pancreatic cancer.

The announcement of his death came just hours after the passing of the Rev. C.T. Vivian, another civil rights leader who died early Friday at 95.

Lewis was the youngest and last survivor of the Big Six civil rights activists, a group led by the Rev. Martin Luther King Jr. that had the greatest impact on the movement. He was best known for leading some 600 protesters in the Bloody Sunday march across the Edmund Pettus Bridge in Selma.

At age 25 — walking at the head of the march with his hands tucked in the pockets of his tan overcoat — Lewis was knocked to the ground and beaten by police. His skull was fractured, and nationally televised images of the brutality forced the country’s attention on racial oppression in the South.

Within days, King led more marches in the state, and President Lyndon Johnson soon was pressing Congress to pass the Voting Rights Act. The bill became law later that year, removing barriers that had barred Blacks from voting.

Lewis joined King and four other civil rights leaders in organizing the 1963 March on Washington. He spoke to the vast crowd just before King delivered his epochal “I Have a Dream” speech.

A 23-year-old firebrand, Lewis toned down his intended remarks at the insistence of others, dropping a reference to a “scorched earth” march through the South and scaling back criticisms of President John Kennedy. It was a potent speech nonetheless, in which he vowed: “By the forces of our demands, our determination and our numbers, we shall splinter the segregated South into a thousand pieces and put them together in an image of God and democracy.”

It was almost immediately, and forever, overshadowed by the words of King, the man who had inspired him to activism.

Lewis was born on Feb. 21, 1940, outside the town of Troy, in Pike County, Alabama. He grew up on his family’s farm and attended segregated public schools.

As a boy, he wanted to be a minister, and practiced his oratory on the family chickens. Denied a library card because of the color of his skin, he became an avid reader, and could cite obscure historical dates and details even in his later years. He was a teenager when he first heard King preaching on the radio. They met when Lewis was seeking support to become the first Black student at Alabama’s segregated Troy State University.